The Swimming Pool as a Springboard
Editors’ Roundtable
Column by David S. Rubin 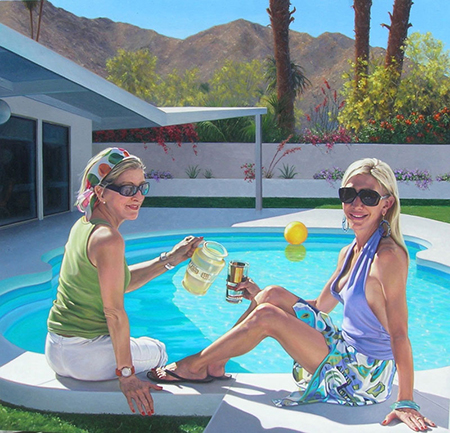 Having just returned to living in Los Angeles after a 34-year adventure as a curator at various institutions around the U.S., I have begun scouting exhibitions to see how the local art scene may have evolved in the time that I have been away. Always looking for trends and connections among artists who on the surface may have little in common, I became intrigued by the fact that the swimming pool, an obvious Southern California cliché, is the setting for works in two June exhibitions, one by veteran painter D.J. Hall, and the other by the young video artist Nathaniel Klein. Hall's recent paintings and new digital prints were on view at Craig Krull Gallery, while Klein's videos were part of the group exhibition "Transporter" at Kopeikin Gallery.

Hall's attraction to the swimming pool as a backdrop for her painted scenarios dates back to the 1970s, when she began painting staged compositions of women basking poolside in the sun. Although linked during the early years of her career to the Photorealist movement, Hall's interest in the swimming pool has more do with her love of Pacific sunlight than with the pool as a subject for its own sake, or for that matter, with photography. While her fascination with the intensity of sunlight links her tangentially to the Light and Space movement, Hall's settings are also partly autobiographical, in that poolside was where she found happiness during a difficult childhood.

Another constant that characterizes Hall's paintings over the years is that she has repeatedly depicted her poolside goddesses in frozen moments of leisure activity, a scenario that provides viewers with plenty of fodder for both narrative and symbolic interpretations. It would be shortsighted, however, to categorize Hall as a storyteller or a symbolist. In looking at her paintings for the first time in several years, it became immediately evident that she approaches the subject that she has embraced for decades simply as a point of departure for compositional playfulness, as in when a bright yellow beach ball functions as an abstract foil to a painting's illusionism, or a martini glass occupies the empty space between a depicted scenario and a painting's edge.

In contrast to the subtle intuitive formalism that underlies Hall's paintings, Klein's videos are steeped in storytelling, distinctly conceptual, and experimental in their usage of 21st-century technology. Inspired by a short story by John Cheever, in which the protagonist swims from pool to pool in a suburban neighborhood, Klein's 9-channel video installation "The Swimmer" tells Cheever's story as seen from a drone, which was employed to make the recordings. Using Google Maps as a research tool, Klein identified a sequence of swimming pools and then went door-to-door soliciting permission to record a swimmer enacting the specific scenario. With the monitors intermingled among other artwork in the gallery, arranged in succession and roughly in proportion to actual locations in the real world, the swimmer moves from monitor to monitor in a continuous loop, with the action controlled simply by the turning on or off of a light switch.

As is the case with Hall's paintings, engaging with Klein's videos takes us outside of the narrative, as the wavering motion of the drone creates a vertiginous effect akin to what one might experience from a diving board at an uncomfortable height. A detail such as the rippling movement of water conjures up associations with David Hockney's iconic "Splash" paintings. The subtle variations in the structure of each swimming pool bring to mind the architectural inventories of Judy Fiskin's photos of stucco houses, as well as Ed Ruscha's landmark artist books, such as "Every Building on the Sunset Strip" and "Nine Swimming Pools and a Broken Glass."

Coincidentally, artists' depictions of swimming pool imagery are not limited at the moment to exhibitions in Southern California. In London, the Tate Britain has just closed a major Hockney retrospective, which will travel to the Pompidou Centre in Paris and the Metropolitan Museum in New York. Additionally, London's Skarstedt Gallery has just exhibited new paintings by Eric Fischl, in which the artist returns to the poolside settings that served as backdrops for his explorations of adolescence in the early 1980s. In his new works, Fischl turns his attention to the subject of aging.