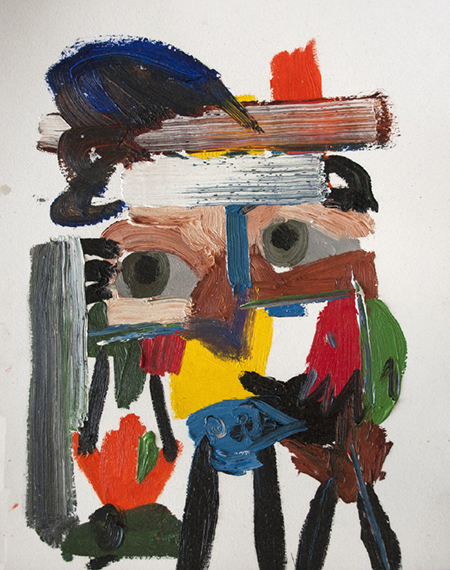 The bold and colorful portraits of Erik Olson jump off the surface to which they are applied. The painterly strokes ooze their respective properties that make up the luminous and sometimes chunky medium of oil paint. Colors are not fully mixed as white, blue, and pink lay next to each other and the bristles of the brush are clearly marked on the surface of each painting. Olson is a portraitist, or at least he has become one through continued interest in the human face and form. The direct application of paint and the artist’s desire to understand his subject speaks to his interest in capturing the essence and emotional character of his sitters. Yet these are not conventional portraits, they explode outward like fireworks and are barely recognizable as human at first glance.

Portraiture is a time-honored genre that dates back to ancient civilizations. From conceptual attempts in Egypt to slick representational likenesses in the 19th century academy, portraiture has evolved with media and techniques that were sometimes associated with the height of sophistication yet also accessible and inexpensive through the development of photography and the digital technology of the 21st century. Olson embraces this range in this series of studies. These seemingly unpretentious compositions are not merely loose sketches but serious inquiries about people the artist cares for and has carefully studied.

Olson plays with the history of portraiture as he utilizes the customary format of a vertical rectangle to frame the head and shoulders of a sitter. That each image is clearly a portrait becomes apparent when the group is viewed together as a series. They vary in levels of abstraction. "Study #11" and “Study #16" have eyes that situate the subjects’ humanity. "Study #13" reduces the composition to six distinct brush strokes that are completely abstract. By contrast, "Study #17" can be broken down into geometric shapes that build upon one another to form a strong jawline and square head. This piece draws from the idiom of synthetic cubism, given the bright colors and simple shapes. The variety of these studies and the different applications speak to the visual languages that Olson utilizes and the personalities depicted within them.

Thinking through the formal elements and principles of design, identifiable figures emerge out of Olson’s graphic shapes. The artist’s use of space and color brings to mind Paul Klee’s painting “Senecio" (1922). The portrait of an older man is divided into geometric shapes of red, orange, and yellow. The playful aspects of the work highlight Klee’s interest in creating energy from line and maximizing how forms build upon one another. While Klee’s approach was different in many ways, both Olson and Klee share an uncanny way of capturing a portrait with minimal details yet simultaneously building shapes to convey a personality.

Olson sees his process as a way of constructing identity. The way he uses abstraction de-emphasizes recognition of the individual, instead encapsulating his subjects through an energetic color palette, the simplified contours of a face, and through the direct attack of his brushwork. Olson’s work is based upon a solid foundation in the human form, but his application changes from piece to piece. A continuation of his figure studies, Olson’s growth and development of these fragmented images shows no sign of letting up.