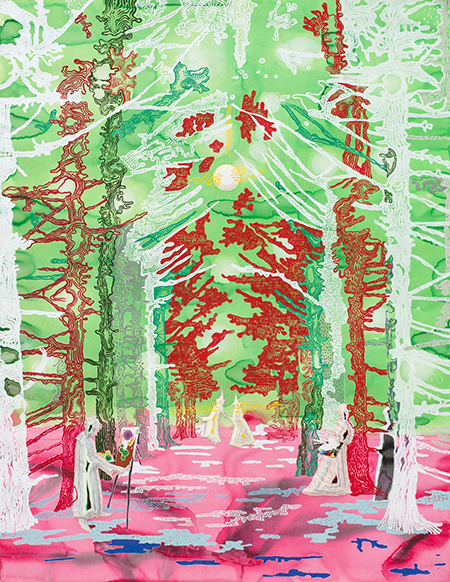 Anna Fidler has long been one of the Northwest’s most original visual stylists. Her paintings — actually more akin to wall-based relief sculptures — layer strata of meticulously shaped colored papers into distinctive tableaux that are near-topographical in their three-dimensionality. In her new body of work, “Ettes and Esses” she deploys her formidable technique in a celebration of female empowerment. The show’s title refers to suffixes that have been used historically to diminish women’s stature:  a suffragist becomes a suffragette; a female prince a princess.  If you build diminution into language, marginalization is more easily enabled.

Fidler is out to assuage this inequity in her depictions of archetypal Amazons: a witch on horseback in “Sorceress;” a group of dancing sprites in “Don’t Let Them Tame You;” a circle of exultant mystics in “Victorian Riot Girls.” These fever-dreams of saturnalia and arcane rites are surrounded with a visible electricity. Intricate latticework painted with acrylic, colored pencil, and pastels, echoes the contours of trees in “The Five (Summer)” and stars in “No Faded Forests (Spring).” There is Wagnerian grandeur in Fidler’s sylvan idylls, rife with High-Romantic drama and pagan allure.