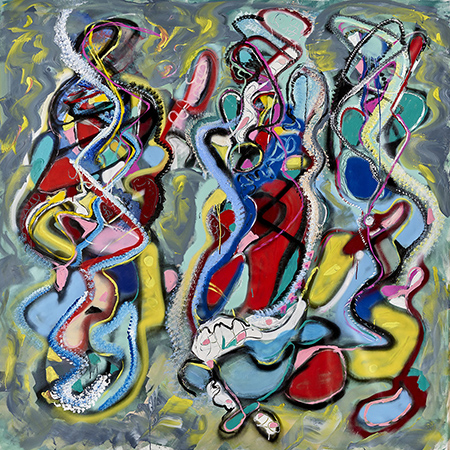 Inching away from the figurative works of his past, New York native Alexander Yulish’s latest works feature an increasing amount of abstraction and a seemingly celebratory tone with their vibrant hues, curvaceous forms, and electrified movement. Still retaining a sense of perspective with a foreground and background, the works in "Out of Order" reject the traditional rule of abstraction which values absolute flatness. Yulish creates a sense of tension on these canvases with this early Jackson Pollock-esque mixture of aesthetics. The eye cannot immediately categorize his images as purely figuration or abstraction, so it lingers, drawn to the seemingly discordant nature of the paintings. In most cases, the viewer sees what is actually there before projecting their own ideas onto the image. But here the reverse occurs, with the viewer seeking out the prescribed notions of what the painting should be before actively looking. The show’s title refers to this reversal.

Although typically considered to be self-portraits, Yulish’s paintings can be more accurately described as explorations into the collective human psyche. His earlier work aimed to capture universal emotions and give them a human face. With this recent embrace of abstraction, his intended sentiments now have a potentially broader appeal, as anyone can identify with the joyous mood presented here. The playful tone of this show stems from Yulish’s childhood, as he was raised by his mother, renowned sculptor Barbara Perlman, in the historic Chelsea Hotel. Surrounded by artists and writers from an early age, he became quite familiar with the creative process and was encouraged to develop his artistic talent. After attending Connecticut College, Yulish started exhibiting in various Los Angeles and New York galleries. Now with "Out of Order," one can begin to see his evolution as a painter and appreciate the boundless joy sparked by his freedom of experimentation.