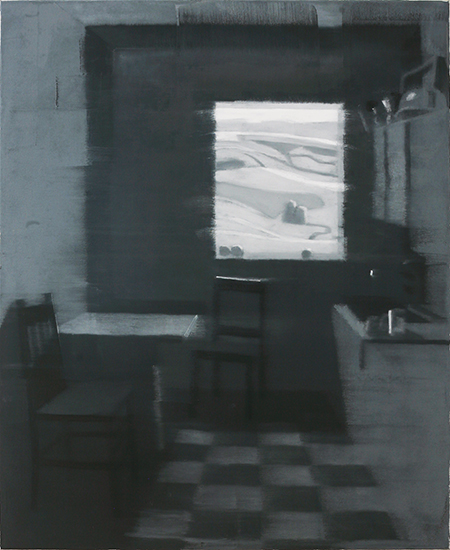 Like a composition by Philip Glass, Benny Fountain’s paintings explore seemingly infinite permutations on a repeated theme. The works in “while the whole world moves; and every part stands still:” (title taken from an e.e. cummings poem), depict still-lifes and domestic scenes that mine our buried strata of memory and nostalgia. The domestic tableaux in the series “Idaho/Oregon Fiction” all hail from 2016 and 2017. Each of these eight works depicts the kitchen of Fountain’s erstwhile home in southeast Portland (he has since moved to Waco, Texas, where he teaches art at Baylor University).

He used to paint in this kitchen in the morning, which caught the first rays of sunrise and slowly filled the room with a honeyed glow, which came to be imprinted in his mind and haunts him still. The paintings show the room from the same angle and include the same elements: two chairs, a table, a sink, and a window. But the view from the window isn’t a Portland cityscape; it’s the rolling hills of northwest Idaho, where Fountain grew up — a Twilight-Zone mashup, with the recent past meeting the deeper recollections of childhood. Do we ever escape the landscapes of our rearing, the artist seems to ask, or are we forever gazing into the rear-view mirror?

Sometimes memories blur, as the black-and-white “#2” and “#3” suggest. The former turns the Idaho pastoral into a broad, palette-knifescape, the latter into squiggly impasto. The image transmogrifies in the yellow-and-periwinkle “#1,” “#2,” “#3” and “#4,” in which a rigorously hard-edged style gradually blurs into sensual expressionism, the pure rectangle of the window devolving into a smear of melted butter. Counterintuitively, the paintings are not hung in numerical order — which would have suggested a progression from realism to abstraction — but counter-numerically, as if one is coming to after a night of carousing, the world slowly congealing into focus. The still-life series, winkily titled “Things That Exist,” takes a trio of objects through a trajectory from misty realism to planar geometry. The series moves from “#1” with its matte surface, to the more elemental “#11,” and on to “#9,” all shiny and Hans Hofmann-like in its push/pull arm-wrestling of forms.

Despite the obsessiveness and monomania of the subject matter, the paintings, while exhaustive in approach, are never exhausting to the eye. Fountain combines the blur of Gerhard Richter’s photo paintings with an eye for geometric painting and color theory. (This summer he’ll be in residency for two months at the Josef and Anni Albers Foundation in Bethany, Connecticut.) His handling of grayscale tones and liminal shadings from lilac to gunmetal is, to use an adjective once overused but now infrequently invoked, masterful.

Beyond art-historical allusions and technique, though, the affective power of these paintings lies in their ability to gut-punch our emotions. A kitchen in all its symbolism of gathering-together and nourishment; a window through which we peer back into our childhood; the memory of family with all its tendernesses and flaws; and the commingling of our current and primal selves — this is complex and poignant stuff. There’s a 1997 song by The Verve called “Bitter Sweet Symphony” with the lyric “I can’t change/but I’m here in my mold ...”  These paintings are more étude than symphony, and while they portray a household scene as an unchanging, archetypal mold, they are anything but cookie-cutter iterations. Rather, like Proustian reveries, they remind us for good and ill where we came from. The rest is between us and our ghosts.