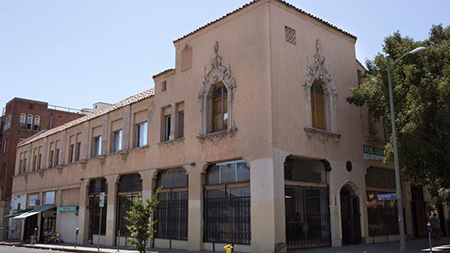 The Spanish Revival building at W. 7th Street and Carondelet Street in Los Angeles to be readapted for the Berggruen Institute. Photo: Rich Loomis, courtesy the Los Angeles Times

We recently received a short notice from a local small business operator, Gary Wolin, that his fine artists' paper company was facing eviction. McManus & Morgan, Inc. has been in operation for nearly a century (just about forever by Los Angeles' standards), most of it at the same location on West 7th Street, a block west of MacArthur Park. The building is a minor example of Southern California Spanish Revival architecture, sparked and perhaps best exemplified by Bertram Goodhue's Balboa Park structures built for the Panama-California Exposition of 1915. New iterations soon followed, notably Sumner P. Hunt's Auto Club headquarters south of downtown, Pasadena City Hall, as well as most of the city of Santa Barbara (post the 1925 earthquake).

The property was recently purchased by the Berggruen Institute, a public policy think tank. The story is not that the city is about to lose another bit of its architectural history to gentrification. Hardly. The founder is billionaire Nicolas Berggruen (thanks to Berggruen Holdings, its namesake's private investment company), whose father was Heinz Berggruen, a world class art dealer and collector, and founder of the Berlin-based Berggruen Museum. His half-brother John is well known on the West Coast as the longtime owner of one of San Francisco's pre-eminent galleries. Nicolas is a significant art collector in his own right, and serves on a string of museum boards internationally, including LACMA as well as his father's Berlin collection.

If the bloodline implies that there is a sensitivity to the context of art and culture, the recent expansion of his Institute's mission to include a Philosophy and Culture Center reinforces that perception. The core mission, however, is embodied by the 21st Century Council and the Think Long Committee for California: developing ideas for long term progress towards a stable and prosperous global political system. The Berggruen institute's primary campus is to be located in the Sepulveda Pass, near the Getty Center. The 7th Street property has been purchased to serve as the primary satellite location, and was intentionally selected for its proximity to downtown.

Mr. Wolin's fear was that McManus & Morgan — along with a holdover letterpress printing specialist that has been a neighboring tenant since the early 1980s, Aardvark Press — would be tossed aside to make way for the new. But if Berggruen, and his principal architect Diego Cano-Lasso of the Spanish firm SelgasCano, are to be believed, these unusual tenants are unlikely to be evicted.

Both enterprises are modest and improbable throwbacks from a commercial standpoint. McManus & Morgan specializes in fine art specialty papers; Aardvark's letterpress model has adapted to the near universal use of computer technology, but letterpress print production has long since been reduced to a highly specialized niche of a print market that itself has endured a steady decline for the last two decades.

But the desirability that Berggruen retain them as tenants stems not merely because of the charming nature of their companies, nor for the sake of nostalgia. It is because they represent a living connection to a lengthy period in which three of Los Angeles' most important art schools were within easy walking distance: Otis Art Institute (founded 1918, now Otis College of Art and Design, located in Westchester by LAX), Chouinard Art Institute (founded in 1921, later to become Valencia's Cal Arts), and Art Center School (founded 1930, now Art Center College of Design, located in Pasadena). They are cultural talismans that, assuming they remain a part of the Institute, call up cultural ghosts whose descendants continue to seed one of the most fertile creative cultures in the world.

If neither McManus nor Aardvark are likely to retain their original identities, at least not for long, the act of retention immediately shapes the nature of the think tank inhabiting the modified Spanish Revival building they share in the neighborhood that launched Los Angeles as a cultural engine. What their presence infuses into this intellectual and cultural petri dish is likely to reverberate for a long time not as a quaint artifact but as a historical reminder and spiritual affirmation.