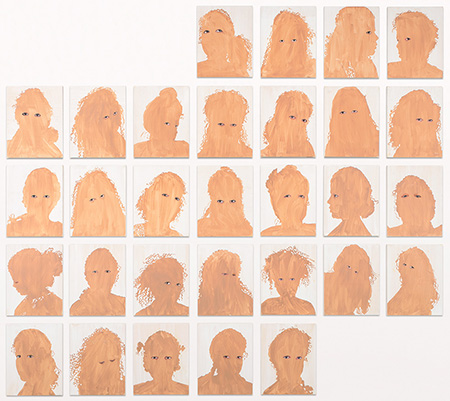 A powerful feminine aesthetic of dense patterns, jewel-toned palettes and female figures dominates Firelei Báez’s “Vessels of Genealogies.” The Dominican-American, Miami-based artist explores a complex construction of race, culling from a range of histories including Black Power, North Indian textiles, Creole culture, and her own Caribbean heritage. Underlying Báez’s array of symbols and references is the understanding that race is far more multifaceted than the ‘black-and-white’ dichotomy dominant as discourse in the U.S.; the work also visually suggests that around the globe women’s bodies are too often a site of racial conflict.

In many of Báez’s works, like “Daughters of the Revolution,” images of women are loaded with masses of florals, fists, chains and tattoo motifs. But some of her most powerful works are those more formally simplified. In “Can I Pass? Introducing the Paper Bag to the Fan Test for the Month of July, 2011,” the artist subjected herself each day of the month to discriminatory measurements of the skin tone and hair texture commonly applied to people of color. These reductionist works are made up of three components: the flat plane of the artist’s own skin tone; the silhouette of her curly head of hair; and pairs of realistically painted eyes that pierce through the flatness with individuality and the alertness of selfhood.