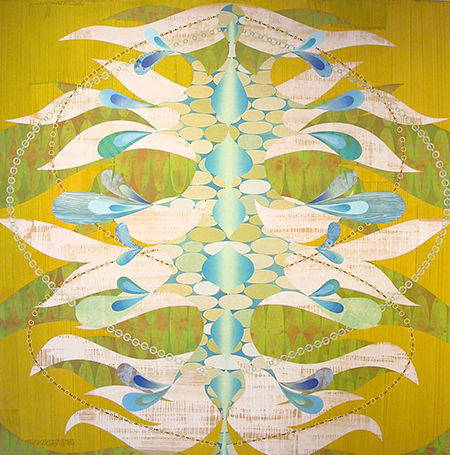 The death of designer and collagist Rex Ray two years ago at age fifty-eight was a real loss to the San Francisco art community. A prolific designer of rock-band posters (counting David Bowie and the Rolling Stones among his clients), flyers, T-shirts, supporter of the gay community, and collagist extraordinaire, Ray possessed a seemingly infinite well of creativity and craftsmanship, Ray, with that wonderful alliterative nom de plume, was something of a one-man movement. He once declared himself “too feral for a real job” and symbolized for many, with his anomalous career, the old freewheeling, bohemian San Francisco, now fading into legend. SFMOMA, which owns some forty works by the artist, recently installed a small show, pairing his work with Paul Klee’s (a curatorial match that grates with us purists, but we magnanimously put that aside, yes, we do).

This larger show, "We Are All Made of Light," comprising some thirty works on canvas and paper, along with some archival prints, includes one wall-filling work, “Wall of Sound” (1995-2000). Comprised of some five hundred page-sized individual collages, it is a convincing demonstration of Ray’s range and versatility. It helps argue the gallery owner’s case that Ray was “the hardest-working artist I’ve ever met.” The combination of dedication and talent shines through, in the large floral canvases “Rosathoria,” “Lichina” and “Clavaria,” with their stylistic hints of Aubrey Beardsley, Friedensriech Hundertwasser, and Spiro-Graph and Spin Art. “RR 19” and ”Isidia” are baroque-hallucinatory Rorschach tests. The psychedelic mandala “Phaedoarubas” symbolizes and evokes the drug experience, much as Fred Tomaselli’s collages do, but without the actual contraband. Ray just sticks with paint and cut paper, exquisitely arranged and assembled. If our bodies emit light, through bio photons, as scientists postulate, Ray shows that artworks radiate too.