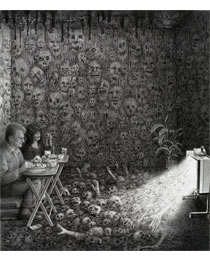 We are rarely astonished by art created on paper with a pencil and charcoal. But the eye-opening work of Laurie Lipton serves as a reminder of just that surprising fact. Lipton’s draughtsmanship is staggering and the towering patience required to render her epic drawings is practically unfathomable, accustomed as we may well be to quickly-rendered art and instant gratification.

Lipton’s virtuoso skill is yoked to a visionary sensibility influenced by 17th century masters of art like Francisco Goya, Albrecht Durer and Jan Van Eyck, as well as religious painters, particularly Heironymous Bosch. Her intricate renditions in black and white, with supremely detailed imagery built up in an endless flurry of minute pencil strokes, are satirical and darkly humorous in the extreme, addressing societal themes of alienation and indifference, and primal human concerns about sexuality, mayhem and death. The amazing juxtaposition of visual filigree with profoundly disturbing themes may be unsettling, but it persistently invokes a rare kind of beauty that stands quite apart in the world of contemporary art.

The London-based New York native is the forty-third artist-in-residence at Santa Ana’s Grand Central Art Center and this show, aptly titled “Weapons of Mass Delusions,” is her first solo exhibit on the west coast. The signature work, “Delusion Dwellers,” serves as a culture-wide critique of the voyeuristic propensity and passivity of mass conformity. It depicts with deft use of perspective an audience of viewers, enraptured at the site of some spectacle, but whose eyes, with the exception of a single surrogate for the artist, fail to meet our gaze. The congregation of nearly identical worshipers casts its eyes aloft; many with gestures of prayer and submission, as a pointed star of light in the distance behind them illuminates the scene.

Mass media, particularly “Reality TV,” takes some severe hits from Lipton’s art. She tells a story about the genesis of a 2007 drawing titled “Prime Time:”  “I was watching the Iraq war on CNN while eating my dinner. I chewed contentedly as people’s homes and limbs were being blown apart. There was a commercial break about washing powder and new cars, and then I was transported back to the bombing, the screaming women, and the blood. The whole scenario suddenly struck me as obscene. How is this possible? I am comfortably eating a meal in my own home while watching horrible suffering. This is ‘normal’ TV viewing. I am not even put off by my food.”

The darkly-rendered charcoal and pencil drawing of “Prime Time” depicts a couple with TV dinner trays in their living room illuminated only by light spilling from the television across the room.  But light is not the only thing spilling from the TV.  It is also emits a flood of skulls, bones and body parts onto the living room floor in front of the couple. The Oh-My-God moment comes when we notice that the walls are either wall-papered with or formed from a sea of gasping faces. The passivity of the couple sitting calmly amid this nightmare is startling and ridiculous.

More whimsical is the large 2008 drawing titled “On.” Here we see a radically caricatured 1950s-style housewife in an apron and bullet bra grotesquely smiling at us as she turns a dial in the monumentally complex technology of her home or kitchen. The wires, dials, meters and pipes frenetically fill the entire background of the drawing as the housewife poses conventionally among them. One ponders, agog, about the hours of rendering that Lipton clearly invested into this insanely detailed image. But the conglomeration of detail serves to pile the satire on, building to a visual mass that is crucial to the success of the image.

Some onlookers may shrink from the direct look that Lipton takes at mortality and death. “The Dead Factory” depicts the mortal round of birth and death as a complicated assembly-line of skeletons and skulls, a mass-produced humanity whose point and purpose is highly questionable in the automation of an endless, mechanical existence. It’s gallows humor that Lipton offers us, unflinching but really quite hilarious once you get past the brutality of the overstatement.