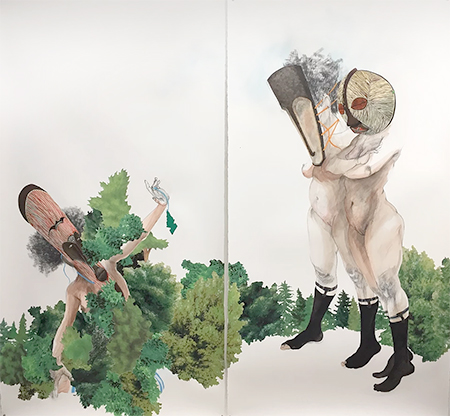 While the general premise of the group exhibition “A New Look” is a fresh take on figurative art being made today, the relationship of the figure to art history is only a sliver of the complex contents that these seven artists engage. For a start, it is immediately evident that the traditional male gaze is absent here. In fact, the works in “A New Look” are an antidote to a variety of characteristics that are associated with white male dominance in the canon, though the artists each accomplish this differently. The works here draw from domestic handicraft, youthful pop culture, camp, feminine myth-making and the emphatically powerful girly.

In two paintings, Swedish artist Anna Bjerger isolates found images of women. In “Tip,” a female figure leans back precariously in her chair as she reads a book, her solitary peace and concentration at risk of toppling in the event of outside intervention. Vulnerability, too, appears in Chicago artist Jessica Campbell’s “paintings” made of assembled swatches of acrylic rugs. “Munch” features the nude figure of a woman. One hand raises a small morsel to her lips, while the other covers her pubic area as blood drips from a cut on her forearm. Campbell’s woman is an image about beauty, but not through the lens of idealization: here she suggests that beauty and self-worth are so often connected to eating and self-inflicted pain. Shrouded in an aureola of white, like a madonna, she’s a symbol of a dark, too familiar female experience.

On the other end of the spectrum lies Brooklyn artist Chitra Ganesh’s mixed media painting, “The Finger,” in which a woman with sparkly beads in her eyes and peacock feathers in her hair calmly but boldly flips off the viewer. The use of youthful, girly material is also prominent in L.A. artist Sadie Barnette’s collages, including “Untitled (Peace Sign),” which depicts a cut-out photo of an African American man casually holding up two fingers on a ground of glitter paper with a single heart-shaped bead in the center. It’s as if his gesture of optimism has been realized within an extreme, other-worldly environment.

Yet another material of the feminine vernacular is the crocheting used by New York artist Caroline Wells Chandler, whose signature androgynous figures stand on their heads in the gallery’s storefront window. Their legs are spread to reveal no identifiable genitalia, replaced instead by circles of radiating rainbows. The women of Baltimore-based Zoë Charlton’s large scale works on paper likewise complicate our expectations of the nude. Here, two women in wooden masks stare down a third, who cowers in the foliage. Titled “Les Demoiselles (The Great Outdoors),” it references Picasso’s famous painting of Spanish prostitutes, though unlike Picasso’s monstrously-depicted women posing for their viewer-customers, Charlton’s figures are in the midst of their own female-centric narrative.

Miami artist Jillian Mayer’s fiberglass “Slumpies” are the only works in “A New Look” that are not depictions of the figure. Rather, they are objects intended to engage the viewer’s body. Mayer’s accompanying video illustrates how these seemingly amorphous sculptures are actually engineered to support the body as one scrolls through a smartphone, with protuberances and nooks to rest the forehead and elbows. The “Slumpies” are both absurd and tantalizing: a vehicle to critique the disconnection and self-absorption of digital culture, while simultaneously enabling it.

“A New Look” is certainly timely, but the kinds of “newness” here are not the same kind of contemporaneity. Mayer’s works clearly speak to our moment in time, and Chandler’s are contributing to a queer canon that is currently being built in the mainstream art world. For the other artists, though, the gendered issues of the body are not that new — they’ve been a familiar part of our culture for a very long time.