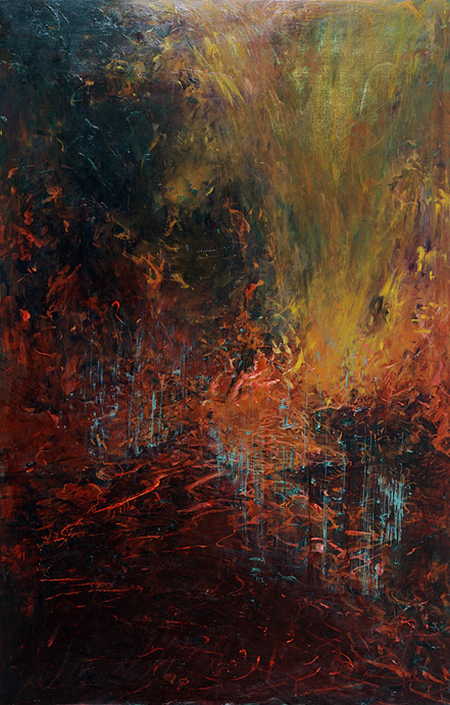 Georgina Spengler’s paintings are seductive impressions of woodland streams replete with watery reflections, surfaces spangled with sunlight and banks overflowing with lush greenery. In a few of her pieces, a patch of blue suggests the sky, but for the most part, the viewer is immersed in these lush pastoral abstractions. The title of the show, "Cisterns and Wells," is inspired by Nobel Prize winner Giorgos Seferis (1900-1971), one of the most important Greek poets of the 20th century. Like Spengler’s mother, Seferis was born in Asia Minor. Although his family moved to Athens when he was 14, the poet's birthplace of Smyma was invaded by the Turkish Army in 1922, and members of his extended family, along with roughly two million Greeks, were forced to flee. Seferis was forever exiled from his homeland. Spengler, who was born in Athens and has been living in Rome since 1982, identifies with the poet. The phrase “cisterns and wells” is taken from one of Seferis’ best-known collections of poems, titled “Mythistorema,” which means “mythical story.” This is the excerpt that inspired the paintings:

"The life that they gave us to live, we lived.
Pity those who wait with such patience
lost in the black laurel under the heavy plane trees
and those, alone, who speak to cisterns and wells
and drown in the voice’s circles."

Seferis also writes of empty cisterns, crumbling houses, and the endless journey of those in exile. “Certain lines keep running through my head,” Spengler says, “and I try to make the same feelings in my paintings as the words on the page.” Pieces such as “Where the World Darkens,” “Drowning in the Voice’s Circles” and “A Little Farther” share the melancholy mood of the poet. Spengler’s attitude and imagery place her firmly within the Romantic tradition of the early 19th century, as exemplified by Caspar David Friedrich and J.M.W. Turner, who created sublime images of nature to evoke strong emotions in the viewer. Spengler uses her paintings to express the longing of those who can never return home.