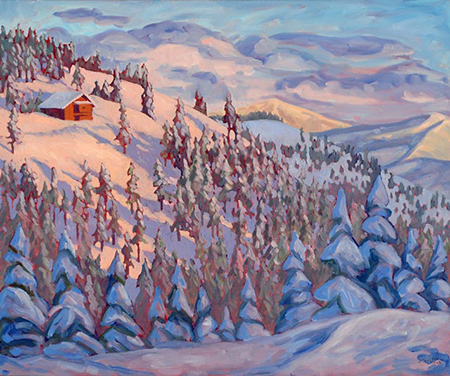 Adding to the blizzard of annual exhibitions Emily Wood has presented since 1997, this latest continues her long chronicling of landscapes in the western U.S. Mostly a local phenomenon, the perennially popular University of Washington graduate (BFA, 1992) has occasionally shown in the Southwest and had a mid-career survey at the Clymer Museum of Art in Ellensburg, Washington, in 2012.

Stylistic growth or evolution is never an issue with Wood. Instead, she creates luminous, reliable signature landscape scenes, mostly across the mountainous divide between eastern portions of Washington State and its coastal area. Each painting is executed in a realistic manner, with smooth or brushy accents. As a result, Wood never surprises, but rather reassures and comforts us with identifiable seasonal views, such as “Near Patterson Lake,” a snowy scene, or “Diamond-O-Ranch, Incoming Storm,” with an ominous dark blue sky above a gleaming yellow pasture in Eastern Washington. “View Toward the North Cascades” sets a characteristic single house or barn on a snowy hillside above a stand of evergreens. In late afternoon sunlight, the snow turns pink.

What is referred to as the “Cascade corridor” becomes Wood’s terrain, stretching from northern Montana down through Yellowstone, as in “Yellowstone River Near Roosevelt Lodge,” which has the most interesting geographical variants in the grouping. Steep, grooved cliffs surround the winding river and look beyond to lightly forested hills. Another river-scape, “Beaverhead River, August Morning” foregrounds the rushing water before sun-parched hills beyond. The best of the winding-river scenes, however, is “Coming Around the Yakima Bend,” in which realism is temporarily left behind in favor of a more expressionistic, pink-daubed blue river and stubby yellow trees at riverside. More dynamic a composition than the others, Wood’s version of Yakima River flows through the dry fields. As a clue to more compelling scenes, a single fisherman in a rowboat is off-center.

Another figure reappears in “Chopping Wood,” as if its presence could introduce a welcome narrative elsewhere missing except for the appearance of human dwellings such as barns, cabins and stables. There’s a whole rural population she could discover.

Four ten-by-eight inch oils, including “Near Patterson Lake” and “Diamond-O-Ranch,” are joined by “End of the Row” and “Rainier Storm.” Despite the intimacy of encounter, their views resemble the larger works. More convincingly when small, six pencil drawings averaging six-by-five inches, have active surface areas with greater variety than the oils, despite the paintings’ occasionally thicker brushwork. Two of the drawings are of Hawaii and Idaho, with “Abandoned House, Skyrocket Hills” and “Near Silver Star, Montana” acting as tantalizing studies for the oils. More loose and dynamic than the ordered oils, the drawings have a quality that is missing in the paintings and makes one wish for greater painterly movement in the landscapes.

Similarly, the smallest paintings, “Small Palouse View” and “Palouse Storm, Late Afternoon” are exquisite, bluntly simplified in their compositions, and intense in their close-value colors and overlapping forms of hillsides, cliffs and roads. Forlorn and devoid of human inhabitants, they cry out for a figurative presence. After 20 years, Wood has more than ably demonstrated her mastery and control over her beloved Cascade corridor scenery. What about joining a few of the other Cascade painters, like Gaylen Hansen, and inserting the human figure as an actor in the environment? Any number of attractive or humorous vignettes could emerge. Either that, or Wood needs a long vacation — south of France? Alaska? Siberia? — to recharge her creative batteries and discover new subjects worthy of the next two decades of her impressively industrious talent.