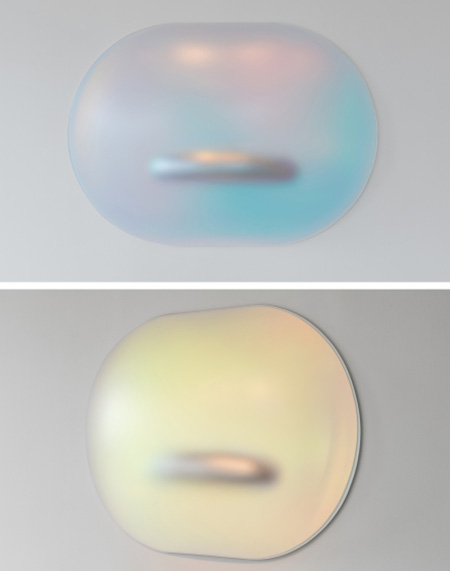 Gisela Colon’s aptly named show, “Atmospheres," is a collection of ten sublime sculptures that resonate with color and light. Mysterious and magical, they defy a simple explanation of how they were produced. After Colon immersed herself in the work and theories of such color and light artists as Donald Judd, Robert Irwin, James Turrell and Larry Bell, she sought to create something new and organic — “almost alive,” in her words. Wall pieces such as “Ultra Spheroid Glo-Pod (Iridescent Lilac)” and “Mega Rectanglopoid (Gold)” began as rectangles but evolved into asymmetrical biomorphic forms that Colon refers to as “pods.” The sculptures resemble cells, bacteria, viruses and other organisms seen through a microscope. Made from translucent acrylic that has been molded and impregnated with color, they emit, reflect and refract light.

Two freestanding sculptures represent a new direction for Colon. “Untitled (Monolith White)” is a 12-foot-tall iridescent white pillar formed from engineered aerospace composite. If art is all about providing viewers with a dramatic perceptual experience, as Colon believes, this piece succeeds. Radiant, elegant and pristine, it manages to be both strong and sensuous. “Light Slab” combines blow-molded acrylic with polished stainless steel that could be seen as a riff on the black monolith in “2001: A Space Odyssey.” Standing eight feet tall, Colon’s “Slab” feels otherworldly and seems to emanate a powerful life force. The metallic colors shift as the viewer circles it, much like the wall pods mutate in response to shifting points of view or changes in the light. The pods are composed of two separate entities, an inner form that can be seen under certain circumstances, and a larger structure enclosing it. When the gallery lights are off, the emphasis shifts from the outer to the inner form. These works aspire to be the opposite of fixed and static; they are shape-shifting, non-linear, non-specific objects. Working from a vocabulary of minimalist geometric forms, Colon achieves glowing, timeless objects of beauty.