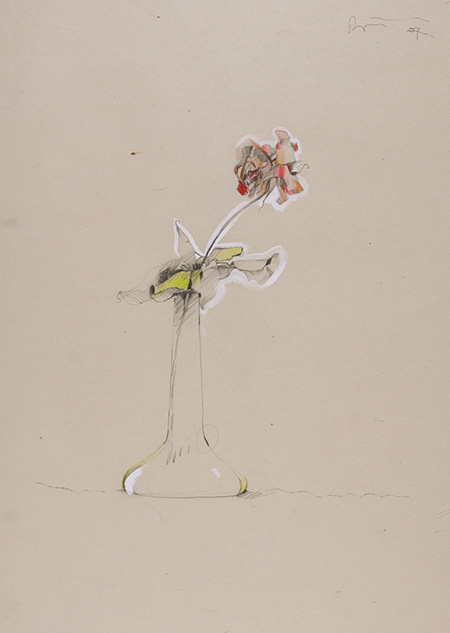 Rick Bartow (1946-2016) was widely known in the Northwest for his neo-Expressionist depictions of mystical animal/human/spirit hybrids, informed by the heritage of the Wiyot Tribe of Northern California from which he sprang. Although there are no animals changing into human form or becoming spirits in the exhibition “Tot Blumen,” there’s still plenty of metamorphosis. In a selection of mixed-media drawings and paintings on paper spanning 1994 to 2015, Bartow returns time and again to simple floral still lifes, portraying flowers not in luxuriant bloom but wilted and desiccated.

Works on handmade Japanese paper such as “Dandelion” (1997) have a spartan formalism recalling the drawings of Charles Rennie Mackintosh. The gracefully bending rose in “#5 Old Rose Blossom” (2007) brings to mind the spindly figures of Egon Schiele. In “Autumnal Metaphor 16 (four flower stems)” (2014), the artist underlines his preoccupation with transformations from one state to the next, charting a plant’s trajectory from bud to bloom to withered husk about to blow away and seed the ground that birthed it.