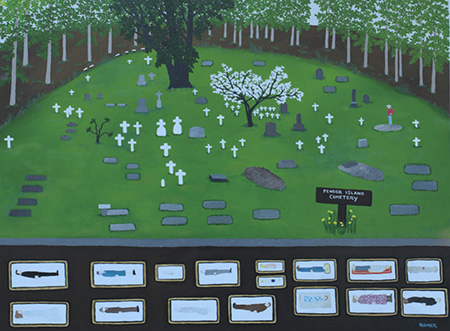 Andrea Longacre-White overfills the main gallery with Shibari rings, rope and miscellaneous sculptural hardware on both wall and floor. They're part Cady Noland, part shaman and part pet store ephemera. The strongest works, however, are featured more prominently in the smaller gallery. Made from "controlled burn" pieces of wood which hang in receptacle-like arcs on the wall and are piled with gold glitter, they overfill the containers to form dry 'splatterings' on the floor below. There is a freshness born out of the paradoxical mix of the concrete and the ephemeral, the timeless and the temporal. It’s a rare case when an object built upon a performative element doesn't feel contrived.

Jessie Homer French's modest-sized paintings, featuring a semi-rural road, a public park with a fishing pool, and a campfire burning a pile of brochures, at first come across as the naïve and self-taught. But keep looking and they begin to grow on you, and reveal a more sophisticated inner structure than is first apparent. A repeating motif is her depiction of underground graves, with fully dressed and presentable horizontal portraits of each coffin's inhabitant, delineated in the lower part of the compositions. The activity above varies from a grassy, spring-like cemetery to a wolf posing amidst a snow-covered hill of crosses. The dark themes in combination with French’s gentle, quirkily charming style, makes for a visual encounter that fits neither the realm of outsider art nor that of the mainstream of contemporary art for that matter, and to its credit.