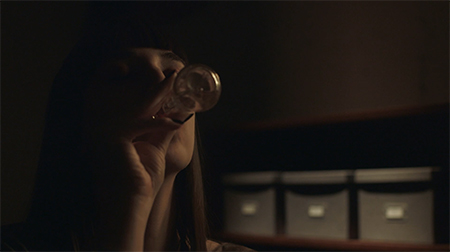 Last month, a deeply felt and politically relevant meditation about the immigrant experience, entitled "Mnemonics", won Best Documentary Short Film and Audience Choice honors at the Portland Underground Film Festival.  A labor of love by Portland-based artist and filmmaker Daniela Repas, the film blends live-action footage with stop-motion animation digitally composited from 2,000 of Repas' graphite drawings on paper. In a series of three vignettes, "Mnemonics" follows a former Bosnian refugee, played by Tanja Miljević, as she enters a warehouse that's empty save for a few stacks of gray boxes. A voiceover — written and delivered (in Bosnian) by the filmmaker's sister, Ivana Repas — poetically recalls the traditions of the old country.

After ritualistically removing her shoes and downing a potent shot of the Bosnian fruit brandy rakija, the protagonist opens the boxes and thumbs through the drawings they contain, each of which represents a memory of the land, people, and armed conflicts she left behind in the Balkans. As the rakija kicks in and she grows more homesick, the strains of folk music fill the soundtrack and the drawings begin to come to life in poignant, shimmering flashbacks.  The film is both allegorical and autobiographical, as both Daniela and Ivana Repas came to the United States as refugees in 2001, eventually becoming U.S. citizens in 2006.

I thought of the film's rich celebration of ethnic heritage during a recent conversation with friends visiting from the United Kingdom, who like many of us are deeply troubled by the rise of nationalism in the wake of Brexit, Donald Trump's ascension to power in the U.S., and the possibility of a Marine Le Pen presidency in France (Le Pen ultimately lost to Emmanuel Macron). There is sometimes a fine line between the ethnic, civic, regional, and national pride that stirs us, and the scourges of exceptionalism and prejudice. Exactly where patriotism curdles into nationalism is one of the pressing issues of our day.

It is a conundrum we face regularly in contemporary art, especially in the realm of biennial exhibitions. Whether here in Portland or in Havana, São Paulo, New York, Sydney or Venice, biennial curators wrestle with thorny questions of what to include and exclude, and by what criteria. In a pluralist economic, aesthetic and ideological climate, factors of postmodern semantics, multicultural sensitivities and Internet-fueled globalism have rendered notions of regionalism and national artistic character increasingly dubious. Within such a paradigm, is there any value in segregating and promoting artwork on the basis of geographical delimitation?

This curatorial quandary parallels the political implications of my friends' concerns about nationalism in Britain and beyond. Can a Scot wear a tartan kilt without impugning an English barrister's powdered wig? Can a Briton extol Beef Wellington and stout ale without demonizing chateaubriand and Bordeaux? These are the little questions that precede more consequential matters such as whether to exit a multinational union — or, in graver chapters of world history, whether to commit genocide in the service of ethnic or religious cleansing.

There is a good reason why Germans no longer begin their national anthem with its erstwhile first verse, "Deutschland, Deutschland über alles in der Welt" ("Germany, Germany over everything in the world"). National exceptionalism — whether in the era of the Nazis or in the unfortunate habit of American politicians today to incessantly tout the U.S. as "the greatest country on God's earth" — is corrosive and dangerous. It is not a valid extrapolation from regionalist pride or patriotism. It is not the antidote to the contextless formalism that Dave Hickey promoted as "redeemed cosmopolitanism" in his 2001 biennial at SITE Santa Fe.

Steeped as we are in the progressive values of moral relativism, we must draw a line in the quicksand that separates legitimate cultural pride from the elevation of one culture at the expense of another. In "Mneumonics," Repas has drawn that line very firmly in graphite on paper. The film's narrator reflects on the social mores of her Bosnian relatives and ancestors with more than a little skepticism. "They are my kin," she acknowledges, "but so strange to me are their customs, their rules of behavior and unmovable superstitions."  In the very next line, however, she praises their senses of "honor, justice, and love."

Repas has found a way to tolerate the values she cannot assimilate, and to celebrate those that she can. This spirit of tolerance is the bedrock of discourse in a peaceful multiethnic, multiracial society. As the headlines remind us, it is under relentless attack at home and abroad, from within and without. To defend it we need an open heart but also a spine of tungsten; love and grit in equal measure; an exquisite sensitivity to cultural nuance but also a thickly calloused skin, a megaphone, and a voice that never tires.