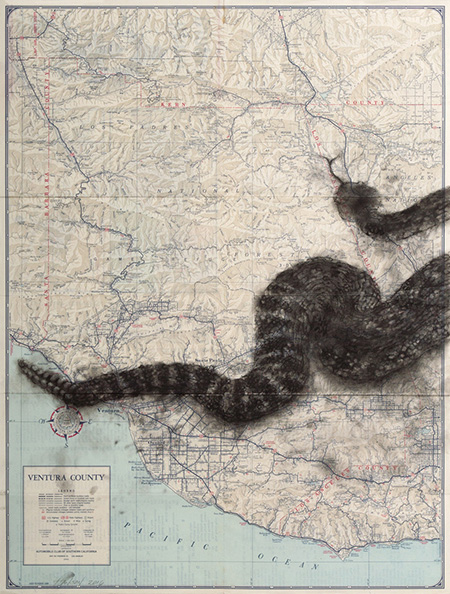 In her show of new work titled “Wrack & Bramble, Field Notes and Meditations,” artist Lynn Hanson shares with us her closely-observed ruminations on nature during her daily walks along the California coast. These paintings, drawings, and a few pinhole-camera photographs show us twists of branches and vines, the view to the ocean in the pale morning light, and the occasional Southern Pacific rattlesnake slithering by. Through her work we find ourselves transported to a place where time stands still, where the world stops spinning for a moment. In this age of multiple distractions it is a welcome respite. The show reflects the artist at the top of her game.

Hanson came to her nature walks early in life, having grown up in rural Minnesota, surrounded by woods and farmland. And having moved to the Central Coast several years ago, she has adapted very well to the region's shores and canyons. She both sketches what she sees and takes photographs to work from later in her studio. Sometimes the works are directly rendered, such as in “Bough,” an oil painting on drafting film which zooms in on a detail of a gnarled oak bough, bent in the middle like an elbow, and composed without a beginning or end. It dangles mysteriously in mid-air, with encrustations of bark layering the surface. Clusters of small knobs remain where smaller branches once began to grow and fell away. It’s an elegant and somewhat melancholic meditation on the life and aging itself and of this branch. In the oil painting “Longing,” a desolate stretch of seascape rendered in monochromatic tones, she shows off her painterly skills. The view is of someone standing on the shore, looking towards the bleak light of an overcast sky as the tide rolls in.

In another series of works, Hanson overlays her drawings and paintings atop vintage maps and charts — she has a preference for late-19th century and early-20th century maps and blueprints.   In “The Tracks” she has carefully painted a snake slithering along over an architectural blueprint from 1916, which shows a segment of train tracks in New York, part of the Ontario, Carbondale and Scranton Railroad Company. In these works Hanson creates a marvelous trompe-l’oeil effect, contrasting the three-dimensional rendering of the creature (snake, crow, other wild animal) against the flatness of the background print.

“The Long Way Home” is a tour de force diptych which marries her techniques and her aesthetics. The upper portion of the work is a very large painting on drafting film of a stand of leafless bramble that gracefully bends over to form an arch. The lower half is a 12’ long blueprint, a track map from 1915, with her charcoal drawings of two crows and a snake perched along the tracks, as if examining them. Although there are no people included in these images, the human presence is here indirectly in these maps, in the grids and codes and the demarcations. The juxtapositions between foreground and background are, of course, deliberate — they have a visual connection, the twist of the snake with the joints of the train tracks, for example. One also begins thinking of other interrelationships, such as of terrain and territory. The crows and the snakes have theirs, the train system (and humanity by extension) has its.