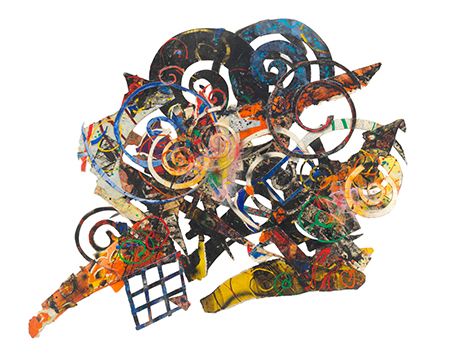 Artists, collectors and art lovers today may think the phenomenon of a young “art star” spotted in an MFA program then cultivated and promoted by gallerists and museum curators started during the burgeoning international art scene and market of the previous decade. The truth is that a select number of young artists with extraordinary talent has always risen meteorically toward the top of the art world. Al Loving (born in Detroit in 1935, died in New York in 2007) was one such art world wunderkind, who, after receiving his MFA from the University of Michigan in the late 1960’s received a one-person show shortly thereafter at nothing less than the Whitney Museum of Art.

That said Loving has remained relatively under the radar in Los Angeles, though this exhibition of his large paper collage/relief “paintings” (presented in conjunction with the Baltimore Museum of Art) isn’t his first exposure here. Los Angeles-based Art dealer Alitash Kebede actually gave Loving his first West Coast show in 1994 at her then La Brea Avenue gallery location.

Loving, always an abstractionist, rooted his early work in the pure minimalist/hard-edge geometric vocabulary of hexagons and cubes. Influenced by Han Hoffman (a mentor and teacher), there are also clear echoes of Sol LeWitt and Donald Judd. Yet as an African American, Loving felt strongly about the powerful Civil Rights movements of the 1960s and early ‘70s. Beginning in the 1970’s, he consciously evolved his practice beyond pure minimalism into the multiple methods of production that resulted in a variety of styles work, all of which explored the politically charged zeitgeist of the time.

The heavy cut paper collage-like reliefs presented in this show, while suggestive of Frank Stella’s geometric and brightly colored reliefs strikingly employ heavily saturated color schemes and hues of their own that semiotically associate themselves with Civil Rights. Indeed, each of Loving’s dozen large abstract swirling “Spiral" collage reliefs here, all dating from the 1980s, present a colorful vortex of vibrant energy that gravitate towards the core issues of human freedom and social justice that remain as pressing (and threatened) today as they were fifty years ago. More prosaically speaking, Loving explains in a statement accompanying the show that, “I chose the spiral as a symbol of life’s continuity. It became an overall wish for everyone.”

Indeed, one easily perceives in these works the life sustaining spiral helix-organized force of DNA, life’s essential structuring of its genetic code. The work also evokes the spiraling force of water as it carves rivers into meandering shapes and dynamic motions. The amplifying round bells of saxophones and trumpets spinning the linear force of a musician’s breath into tunes that fill three dimensional space also come to mind when viewing these pieces.

Yet even with these organic qualities, the works here also present a hard-edge, machine-like “mask,” suggestive of a post-modern riff (with a hint of Futurism’s brutality), and a reference to the African mask’s role as a modernist inspirational marker. However, in all of this work the honesty, power and beauty of Loving’s inwardly accelerating swirls leads to a centrifugal surge outward, resulting in a flood of thought and feeling that pierces the world and enters our hearts.