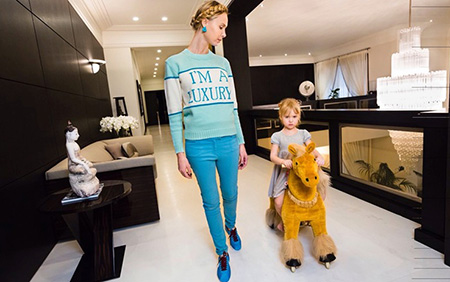 Since the early 1990s Lauren Greenfield has been making images — both locally and globally— about the relationship of self-image to wealth and materialism. She is well respected as a documentary photographer as well as a filmmaker. Her film credits include the acclaimed "The Queen of Versailles" (2012), which traced the attempt to build "the largest single family dwelling" based on the Palace of Versailles, but located in Orlando, Florida. The mega-home never came to fruition because of the 2008 financial crisis. Greenfield's film follows these developments and disappointments. In addition to her films, Greenfield has published four monographs: "Fast Forward: Growing Up in the Shadow of Hollywood" (1997), "Girl Culture" (2002), “Thin" (2006), and most recently "Generation Wealth" (2017) a comprehensive monograph with over 625 illustrations spanning her career, and the centerpiece of this pair of exhibitions.

Greenfield's interest in teenagers' relationship to fashion, status and wealth began as a study of the Los Angeles community where she grew up. Over time the study blossomed into a global investigation that now spans 25 years. The color photographs contained within "Generation Wealth" illustrate the globalization of social status based on material values and celebrity culture. While Greenfield objectively documents people from a wide range of cultures, she does so with a critical eye. Her underlying motivation is to understand why the obsession with status, wealth and beauty is so pervasive not only in the U.S. but world-wide.

Her first book, "Fast Forward," launched her career as a photojournalist. The images depicted loss of innocence — what it meant to grow up in a media saturated society, and how the so-called 'culture of materialism' affected Los Angeles-based youths. For example, the photograph "Mijanou, 18, who was voted Best Physique at Beverly Hills High School, skips class to go to the beach with friends on the annual Senior Beach Day, Santa Monica California" (1993) depicts shirtless boys and bathing-suit attired girls in expensive convertibles parked along the coast and exuding their calm-coolness. Greenfield's project examines how kids dress, smoke, drink and parade themselves as much older than their calendar years, and questions this desire.

Over her career, Greenfield has photographed both the rich and famous as well as unknowns. She has investigated the pros and cons of wealth and the influence of the media on how young men and women view themselves and their bodies. The flip side of the celebratory images in "Generation Wealth" are photographs of kids undergoing plastic surgery and other body beautification processes to align with ideals, depicted in magazines, that do not conform with reality. Similarly, the work from "Thin" investigates women’s unhealthy obsession with self-image through photographs of subjects at a clinic attempting to recover from eating disorders. Greenfield has remarked that in going through her archives to choose images for "Generation Wealth" she realized it was a dark story. The underlying narrative that moves through her work traces the evolution of a far-fetched and unrealistic value system in contemporary culture. Greenfield's images illustrate the dangers as well as the inevitability of transforming the self into an ideal and the desire to live beyond one's means.

Greenfield has an uncanny ability to capture people unabashed. Her subjects are surely unaware of how she will contextualize them, though it's likely they are not only aware but glad to be a part of her project. What's remarkable about Greenfield's images is the fact that her subjects are complicit and that they agree to be photographed. She becomes a trusted confidant who is allowed to present people as she sees them: at times stoic or vulnerable. Many of Greenfield's photographs indulge the subject and portray them celebrating their luxurious lifestyles. In "Xue Qiwenin, 43, Shanghai" (2005) Greenfield depicts the woman swinging a golf club in her Shanghai apartment, which is decorated with furniture from her favorite brand, Versace. The caption relates that in 1994 Xue started a company that sells industrial cable and has since run four more businesses. She is a member of three golf clubs, each costing approximately $100,000 to join. Greenfield objectively presents her subject's reality without passing judgement. It is collectively and through the details of many individual photographs that Greenfield's point of view emerges.

The image that appears on the cover of the book, also featured in the exhibitions, "Ilona at home with her daughter, Michelle, 4, Moscow" (2012), typifies the sentiment of the project. Ilona is depicted beside her unsmiling daughter Michelle, who rides a stuffed horse in an immaculate and precisely decorated hallway. Ilona wears cyan-colored tight-fitting pants, matching blue sneakers and blue earrings. Her light blue and white sweater proclaims, "I'M A LUXURY." This is a fact, an opinion and perhaps a self-fulfilling prophecy. Greenfield's project illustrates the breadth of the desire for luxury and the myriad ways her subjects pursue that quest.