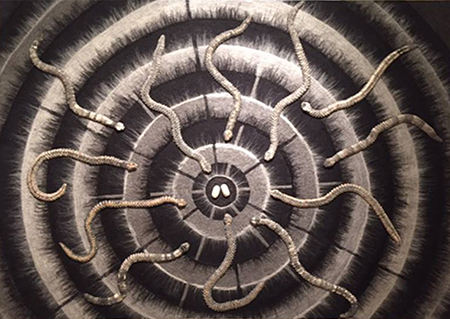 “Hecho en CaSa” is an exhibition of works in felt by Francisco Toledo, though the Mexican artist is not known for his use of textile media. A prolific painter, sculptor, photographer and printmaker, Toledo has also built a multitude of cultural institutions across his native state of Oaxaca, earning the 77-year-old artist the added reputation as a civic hero. The tapestries on display here are recent works produced at Center of the Arts San Agustín (CaSa), an ecology-minded art center Toledo established in 2000.

While felt as a medium is a minor part of his practice, this exhibition’s large-scale pieces are noteworthy for their execution, material tactility and conceptual ingenuity. The indigenous Zapotec traditions of the area are a staple subject matter in Toledo’s oeuvre, and so they are in these pieces as well. Here, ancient Oaxaca wool traditions meet 21st century techniques, with features like hand-tufted corncobs and laser cut grasshoppers layered in simple, graphic compositions. In works like “Quipo blanco,” a corncob encased in a half circle at the top of the tapestry radiates outward, as a league of ascending, pesticide-resistant earworms threatens to devour it. The situation Toledo depicts is both literal and metaphorical. The high-relief tactility of his works enhances his ecological message, making them not just ideas or rhetoric, but tangible and real.