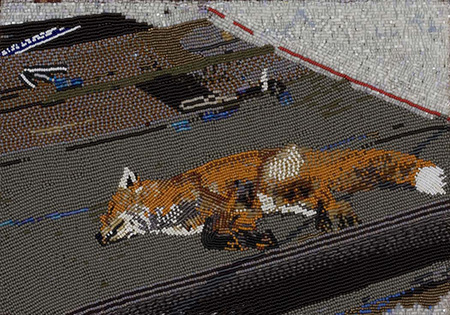 “Two Girls Playing on the Beach with Tar,” Corey Stein’s vibrant post-Exxon Valdez oil spill update of Mary Cassatt’s “Children Playing at the Beach,” created for a traveling show titled “Spill,” underscores Stein’s assertion that her work repeatedly embraces “environmental observations and connections.” While Cassatt’s famed Impressionist oil painting captures the charming natural attitudes of children in realistic colors and shapes, Stein’s bold, decorative, patterned constructions are set ablaze by her commanding manipulation of brightly colored glass beads that she hand sews on felt. Her choice of media acknowledges the artist’s concerns for the current escalation of damages to the environment along with her interest in native American arts in general and that of Alaskan tribes, celebrated for their beadwork, in particular.

Born in Los Angeles to a Jewish father from New York and his Tlingit Alaskan wife, Stein exercises her right to reflect on the dizzyingly contrary influences in her life, up to and including variations in flora, fauna and climate. She alternatively visits family in Alaska or seeks relief from the heat of scorching San Fernando Valley summers via weekly visits to neighboring beaches. “Laundry at 10 Degrees” is based on her photograph of a queue of freshly washed garments, frozen stiff on a clothes line somewhere in the Alaskan tundra during a10 degree chilly spell in April. In contrast, “Fox Tanning in the Sun — Venice” features a bikini clad woman on a beach towel, stretched out to catch the sun’s rays. The title of that languid scene additionally plays off Stein’s “Fox Tanning in the Sun — Chevak,” a work of exactly the same size in which a Native Alaskan hunter begins the tanning process on his recently captured trophy. Differences in culture and societal norms create dissimilar meanings for phrases common to the titles of each of these two 8 by 11 inch works.

Stein boldly addresses dissimilar communities via a variety work, spiked with unanticipated juxtapositions, jokes and word play. “Breakfast for Artists” spoofs the outdated, less than nourishing, boxed cereal advertised as the “Breakfast of Champions” in contrast to Stein’s typical eclectic but nourishing morning fare. Evocative of the tundra, her “Aurora Borealis Bear” features the northern display of starlight swirling in the sky while “Beach Bear” depicts the California Golden state bear with stars from the state flag overhead. Each of the beadwork images of bears is iconic to it’s own separate region.

The mixed media works “The Moth within Me” and “Dawn Boy & Dawn Girl Vomiting Moths” were created for Stein’s epilepsy oriented exhibitions.  Both are based on the book “Hand Trembling, Frenzy Witchcraft, and Moth Madness, A Study of Navaho Seizure Disorder” by University of Arizona anthropologist Jerrold E. Levy. Stein's description of “The Moth Within Me” explains that, “After a contest of strength and wits, the hero kills White Butterfly with a blow to his head. As the head splits open a host of butterflies flies up in a cloud. At the very end of the story, the hero sees to it that the moths that emerged from White butterfly’s head come back from the sky in the form of rain.” By updating traditional Native American art forms and literature, Stein examines socially and culturally consequential concerns meaningful to a variety of individuals and communities.