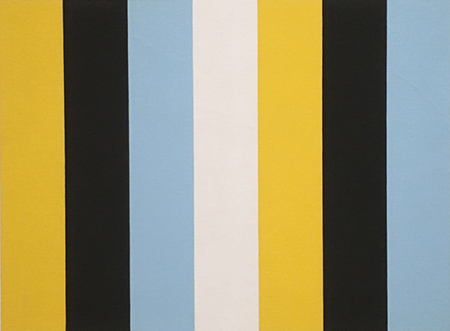 John McLaughlin’s paintings are more about empty spaces than what is visible. An astute student of Japanese painting, McLaughlin sought to investigate the void, the “ma” as the Japanese term it. He especially favored the work of the 15th century Buddhist monk Sesshu Toyo, whose paintings he often viewed at the Museum of Fine Arts. A self-taught artist, McLaughlin began painting at age 48, once he moved to Dana Point California following the war in 1946. McLaughlin’s abstract works came to be one of the most appreciated bodies of work of the post-war era. Rather than pursuing the abstract expressionist aesthetic which dominated painting in the 1950s, McLaughlin became one among a handful of artists investigating hard-edged abstraction. Rather than plunging into the New York scene, he steadfastly remained in Southern California.

The 52 paintings, collages and drawings included in this exhibition prove that he made the right choice. The geometric lines, bars and other rectangular shapes in this selection of paintings appear to be used as markers, as ways of directing the viewer to observe the more essential empty spaces rather than of objects. These highly disciplined carefully planned reductive works also play with figure-ground relationships using limited color palettes. Towards the end of his life, McLaughlin limited his use of color to blacks, grays and whites. He deemed this work the best of his career. The light-filled rooms, along with carefully placed chairs (designed and built by artist/designer Roy McMakin) create opportunities to contemplate and ‘fall into’ the spaces of McLaughlin’s paintings. In his own words, displayed on labels throughout the exhibition, McLaughlin explains that, “My purpose is to achieve the totally abstract. I want to communicate only to the extent that the painting will serve to induce or intensify the viewer’s natural desire for contemplation, without benefit of a guiding principle ... This I manage by the use of neutral forms.”