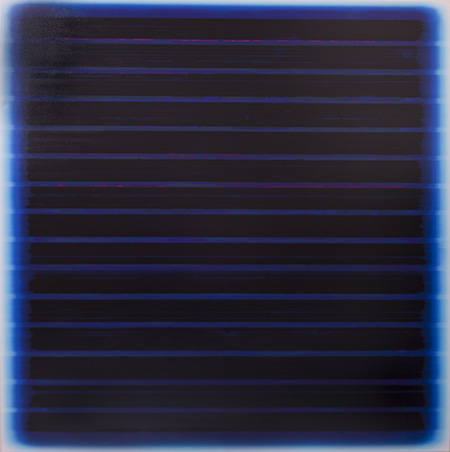 The title of Tom Bolles' show, “Reverence," might be considered as a reaction against our hectic, intemperate era, invoking the slow, sympathetic attention formerly accorded to creative art. Bolles, who considers a work successful when it attains “an indefinable and elusive balance of color, light and texture,” clearly wants viewers to look carefully, as artists do, at a wide range of artists from various eras and cultures. Elaine de Kooning joked about her continual surprise at finding paint still on canvases in exhibitions in the wake of voracious scrutiny by her husband Willem and Franz Kline.

In his 2015 show, titled “Stripes,” Bolles, who had formerly built up his color abstractions slowly, alternating intricate brushwork with multiple glazes, began using a computer in order to execute what might be considered his underdrawing — in the digital building blocks of zeros and ones. These characters remain visible here and there beneath the color he applies later, implying, not for the first time, that mathematics is the underlying reality. Bollles synthesizes digital and traditional painting techniques to create hypnotic fields of color. Three square-format acrylic paintings on canvas, “15 Bars in Magenta,” “15 Bars in Blue,” and the slightly smaller “13 Bars in Blue” read as dark, soft-edged registers overlapping colored backgrounds, as if blurred by overwritten text. We associate such minimalist subject matter (with its mystic, transcendentalist implications) with hard-edged, machine-perfect facture. As Bolles’ painterly ‘handwriting’ becomes clear, the texture of the canvas remains evident as well. Transcendence and mystery are inscribed in these modernist manuscripts, both dark and luminous.

In addition to the canvases, Bolles shows thirteen shaped digital prints of the stripe images already noted; of bullseye motifs in a circular tondo format; and of oblong rectangles shaped to curve out sculpturally in the middle, like drawn bows, or catenary arches. One of the tondos is entitled  “Ode to Tadasky,” Tadasky being a New York maker of Shinto shrines with ties to Op Art. Viewers of a meditative bent will find Bolles’ subdued lyricism, to quote the photographer Walker Evans’ holy trinity, “literate, authoritative and transcendent.”