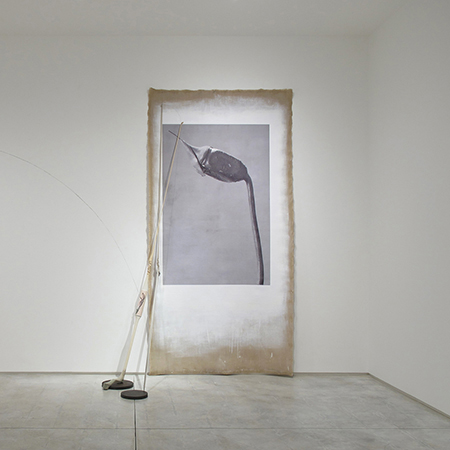 Madrid-based artist Linarejos Moreno presents nine large-scale photographs and prints based on images of 19th-century models of plants. The work is part of a larger project that she showed at the Royal Botanic Garden of Madrid as part of PhotoEspaña in early 2016. The five pieces in the front gallery are unique photographs printed on unstretched gessoed burlap, and the four in the middle gallery are inkjet prints on paper. All are titled “Art Forms in Mechanism,” which refers to Moreno’s ongoing inquiry into the relationship between the industrial and natural worlds. This series began when the artist discovered a collection of 19th-century botanical models in an historic cabinet of scientific curiosities in Spain. The models were manufactured by a European company that specialized in scientific equipment. Formed from papier-mâché, the three-dimensional plants are adorned with gears, clips and hooks allowing them to be manipulated for teaching purposes.

One of the burlap pieces, “Art Forms in Mechanism XlX,” differs from the rest in that it includes three-dimensional objects. Stretched pantyhose extend from the photograph’s surface to the floor and is anchored by a rusted iron disc. The pantyhose holds a small color photograph of a botanical model and a steel hand crank once used in a factory in Spain owned by Moreno’s family. With a background in conservation and an ongoing interest in materiality, Moreno re-contextualizes objects initially designed for industrial or scientific purposes. Initially, she was attracted to the models because, “On the one hand, they were machines, with all their gears; on the other hand, even if they were supposed to be neutral scientific objects, they were absolutely pictorial and subjective.” She was inspired to photograph the models by the nature photography of German artist and educator Karl Blossfeldt. His 1928 book of botanical photographs, “Art Forms in Nature,” was a leap forward in the field of scientific photography because of their size and detail. An original copy of his book is part of the exhibition, along with a copy in which Moreno has altered the introductory text by replacing each instance of the word "nature" with the word "mechanism,” hence the title of the show. From a formal perspective, the size and the subject matter of the photographs allow the viewer to see the amazing detail in the models. As handmade objects fashioned from machine-made parts photographed more than a century later, the botanical models acquire new layers of meaning as Moreno investigates the intersection of science and art.