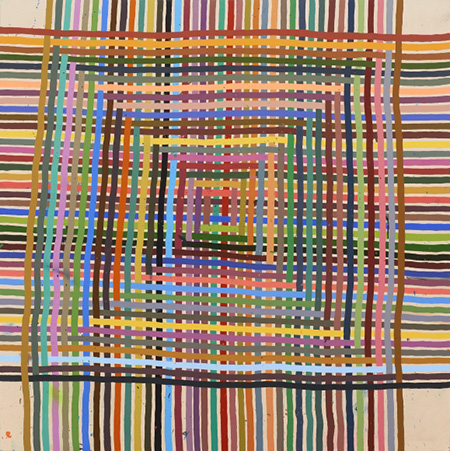 When the blue-chip Berggruen Gallery moved from its 47-year Grant Avenue location into beautiful new digs on Howard Street near SFMOMA’s imposing new building (alongside the latest Gagosian Gallery outpost), some of us wondered if this augured a turn toward big names at the expense of local artists. If the same famous artists appear everywhere in the global monoculture, where’s the local flavor? Where are the surprise discoveries? No fears. While it is certain that major artists will still be well represented, as in the inaugural figurative show and the current abstraction show (on the ground floor and basement), the current show now on the second floor is a statement that the gallery remains committed to top local artists as well. Paintings, collages and prints by Alicia McCarthy is a heartening signal to artsters unafraid of the label of “proudly provincial,” which the late Rene di Rosa used to describe those wanting San Francisco to showcase homegrown talent in national and international contexts.

McCarthy is about as local as Bay Area artists come. Born in Oakland, she attended art school at the San Francisco Art Institute (where she now teaches) and UC Berkeley. She is known as a member of the “urban rustic,” Mission School, a group including Chris Johanson, Margaret Kilgallen, Barry McGee, Ruby Neri, Rigo 23, Clare Rojas and others. The group took it’s name after San Francisco’s then-affordable, bohemian Mission District, and are characterized by their makeshift, scavenged and ‘lowbrow’ art, reflecting the milieu’s graffiti, murals, commercial and popular art.

McCarthy’s abstract paintings infuse motifs from 1960s abstraction — stripes, grids, color mists and splatters — with the iconoclasm of the punk and graffiti scene of the 1980s, and an orientation toward mark-making as process. Her loosely drawn grids or lattices establish, through the overlapping strands, a shallow fabric-space punctuated by small painterly clusters, like astral bodies in an immense field of sky. Her use of humble media — construction paper, gouache paint, spray paint, colored pencil, and house paint — suggests an affinity with early modernist mystics like Paul Klee and Kurt Schwitters, who were acutely alert to the character of materials. Her works also bear comparison with the stripe paintings of Frank Stella, the subject of a recent career retrospective show at the de Young Museum. McCarthy, who has never formally studied color, apparently has an innate color sense that is sometimes resplendent and exuberant, and at times more muted and recessive — rich but not gaudy.

Six large, square-format paintings on wood anchor the show, which also features twelve drawings on construction paper and four colored prints in sugarlift aquatint. Nearly all of them take the freehand-drawn grid, referred to here as a weave. The fabric is vastly magnified, although though the handmade, breathing quality is quite different from the machined perfection of 1960s-era masking-taped abstractions that sedulously avoided any evidence of or reference to the human touch. McCarthy appears to draw or paint her lines from the center out, repeating patterns while turning the panels in 90-degree rotations; the result is works that are radially symmetrical, like the bottoms of woven baskets. Some of the works even seem to depict radiant light, although abstractly and geometrically, suggesting icons or mandalas composed of interlaced strands.

Contrasting with this symmetry are the sprays, blobs and squiggles of color that lie in an ambiguous spatial relationship to the membranes, some lying above, others below the strands. They are Heisenbergian avatars of uncertainty, like Magritte’s woman on horseback in "La Carte Blanche," threading her way through the forest, inhabiting, alternately, two and three dimensions. McCarthy's love of elusive as well as unorthodox materials and processes is evident as well in two works on pinkish construction paper, with the blue shadows of a child’s hand frozen, as in a photogram, by sunlight.