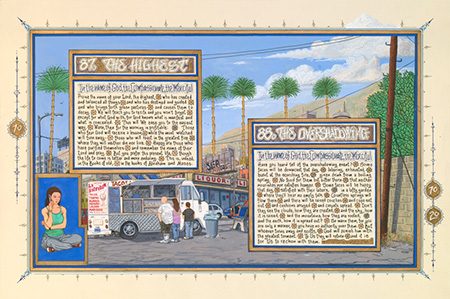 Although it was more than a decade in the making, Sandow Birk’s sprawling “American Qur’an” is unintentionally timely. After the terrorist attacks of September 11, 2001, the Southern California-based artist, whose work is centered around social practice, became interested in the Islamic sacred text known variously as the Koran, Quran, or Qur’an. As he studied a contemporary translation of the text, he became fascinated by its tenets and dubious of the demonization of Islam commonplace in some political circles the aftermath of 9/11.

Birk undertook the formidable mission of transcribing and illustrating each of the Qur’an’s 114 chapters in the vernacular of Southern California graffiti. Each chapter is the subject of an intricately detailed ink and gouache painting, with the text rendered in a script Birk developed specifically for the project. Laid out in an invigorating schema of partitions, as well as along the walls of the museum’s main exhibition hall, the show has a jaunty visual rhythm, thanks to curator Jill Hartz’s knack for dramatic but never overbearing presentation. It is bracing to see an ancient religious document updated in a style so eminently accessible to contemporary eyes and mores. And in this era of Muslim bans and nationalist fear-mongering, this body of work takes on an urgent significance, for it respects not only its source material, but also the ethnic and religious melting pot in which divergent creeds commingle.