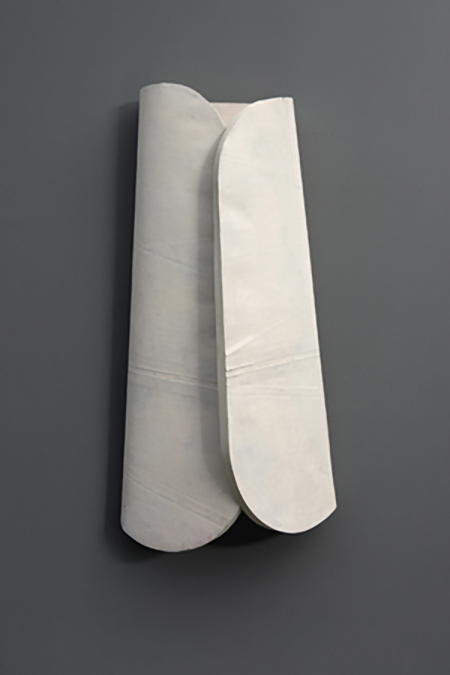 At first glance, the work of Manfred Müller and Shaun McCracken seem an unlikely pairing for the two-person exhibition “Not From Here.” Trained as a technical draftsman Müller transforms large pieces of flat paper into three-dimensional architectural sculptures through an exacting series of folds. Working on a two-dimensional surface McCracken works on a smaller scale and creates an expansive mosaic of interlocking geometric forms that seem infinite. While both artists currently work in Los Angeles they originate from Europe: Müller hailing from Düsseldorf and McCracken from Northern Ireland. “Not From Here” is a meditation on the architecture of abstraction through geometry and resistance to a literal reflection of their respective environments.

McCracken produced an extensive body of watercolor on paper and egg tempera on panel over the last two years. His process is guided by intuition, none of the works are planned in advance. Rather the artist begins in the middle of the panel or paper and works outward, allowing the forms and color to build. “Untitled #392” is indicative of the artist’s meditative and labor intensive practice. Visual pathways are created by accent colors applied over a series of triangles that morph into scalene right-angled, obtuse-angled and isosceles forms. He also plays with squares and infuses rhombus, trapezoid and parallelogram shapes. Our eyes scan the visual plane and bounce around like a pinball ricocheting from one angle to the next, wandering wayward around and discovering new patterns but without there being a natural stopping point. Like a mosaic of stained glass, McCracken creates smaller portals within the panel to create concrete forms from the accumulation of shapes.

Müller works with the absence of color a given, and wrestles with the material through a fastidious series of folds and cuts. “Exordium I” employs oil painted paper transforming a flat surface into a folded sculpture. Mounted to the wall, the paper resembles a scroll or a cocoon that opens from the bottom, as if inviting us, like hermit crabs, to inhabit the interior space created by Müller’s hand. Conversely, “White Prelude,” also displayed on a wall, employs Fabriano paper formed into a similar scroll shape that is now closed. The surface tension between the overlapping papers creates an urge for the viewer to unfold the work and look inside.