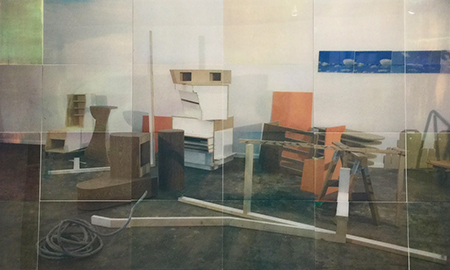 For Chicago-based artist Peter Power, artwork is not just the product of the studio, it is about what happens in the studio. Three of Power’s former students are at the helm of this artist-run space and they have collaborated with him to bring to fruition a show that blurs the boundaries between finished and unfinished work, the privacy of the studio and the public space of the gallery.

The exhibition features two works: a leaning, wall-sized untitled print on acrylic panel, and an editioned artist book that shares the exhibition’s title, “Dogger, Fisher, German, Bight.” In the print, we are presented with a life-sized view of Power’s studio, with raw material and sculptures in various stages of completion in front of images pinned to the wall. In the book are photographs of decades’ worth of practice prints and handwritten notes like, “COURAGE,” and “THINGS DON’T ADD UP.” In both works it is suggested that what we’re seeing is not in line with typical ideas of the “finished” autonomous object — though neither are they works in progress. Pronouncing a piece as finished is one of the most frustrating and elusive decisions that artists must regularly make, and here Power is proposing that doubt in the studio isn’t a hurdle to overcome, but a medium and a subject in itself.