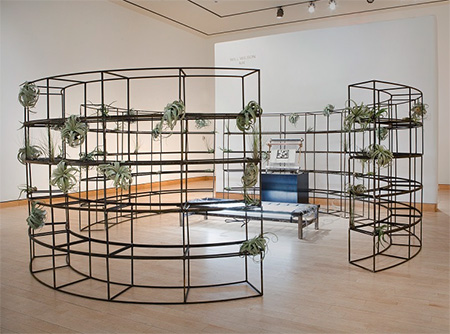 The best science fiction stories are aligned just enough with contemporary reality that we can imagine them coming to fruition. I suspect that's why the gritty "used universe" of Star Wars still claims legions of fans, while Star Trek's cool perfection has failed to connect with mass audiences in recent years. For residents of the Southwest's high desert, Will Wilson's cinematic series “AIR" may land a bit too close to home. Through large format digital images and an installation (or perhaps we should call it a set piece), Wilson chronicles “a post-apocalyptic Navajo man’s journey through an uninhabited landscape.” In this sci-fi saga, the artist plays the protagonist, and most of the sets are Southwestern canyons. But for the gas mask strapped to Wilson's face and a muddy array of monochrome filters, these could be wide angle mementos from a weekend hike in New Mexico. In the dystopian near-future that we're all imagining a bit more often these days, this is probably what life in Santa Fe would look like.

Modern anxiety turns to fascination as Wilson invites us into a survivalist dwelling. One series of images shows our hero lounging about in his Hogan, a traditional Navajo dwelling, among gadgets, wires and breathing tubes. Each view is pieced together from multiple images, a reminder of the fragility of a post-apocalyptic archive. Should one photo slip from this collage, the last man on earth could vanish entirely. Wilson's "AIR Hogan Greenhouse" installation, which sits at one end of the space, is the story's most fantastical element. The framework for a futuristic version of the protagonist's earthen home encloses a cot made from metal and woven plastic tubing. Back to reality: according to a 2016 report from the Center on Budget and Policy Priorities, New Mexico has one of the highest income disparities between the rich, middle class and poor. For so many communities in New Mexico, Wilson's future really is now. The message is clear: Let’s fight for economic and racial equality before the sky smogs over for everyone.