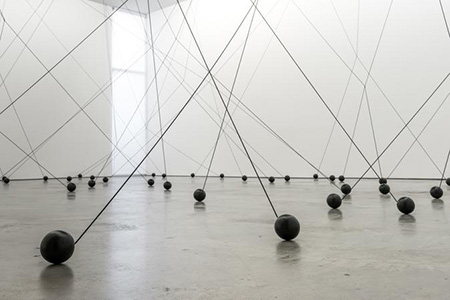 Venezuelan artist Magdalena Fernández is best known for her monumental sculptural and video installations. The drawings and sculptures in this show, as well as small videos, are impressive. "Flexible Structures" is something of a mini-retrospective, with drawings dating back to 1999 and videos from 2004-2005. The sculptures, however, are all from 2016, and the large installation in the downstairs gallery was designed specifically for the space. Titled “2i000.17,” black steel spheres on the floor are connected by black elastic cords crisscrossing the space. It is designed to be interactive, in that visitors must step around and over the cords to enter the space, where they are encouraged to touch them. Overall, it functions as a huge drawing in space, reflecting Fernández’s dedication to spatial organization. Inspired by Piet Mondrian and Sol Lewitt, as well as Venezuelan predecessors Gego, Jesús Soto and Alejandro Otero, she takes their geometric abstractions to another level by adding dimension and movement.

A yearlong video installation near downtown Houston offers another opportunity to witness how dramatically Fernández can manipulate space. Known as "The Cistern," this huge cavern was built in 1926 as a 15-million-gallon water reservoir. The space, which is filled with 200 columns and produces a 17-second echo, has been reopened as a site for public art, and the Fernández piece is the first installation. Titled “Rain." a two-minute video and soundtrack simulates a thunderstorm, a perfect fit for the previously water-filled space. It was produced in collaboration with the Museum of Fine Arts, Houston, which showed another of the artist’s major video installations recently in the traveling show "Contingent Beauty." Fernández has been working with the visual effects of light and water since 1993, and the six videos in the upstairs gallery also reflect these investigations.

The sculptures in the show are constructed with black spheres suspended on flexible steel rods and arranged in space to form squares, triangles and other geometric shapes. The drawings, most of which are ink on paper, appear to be studies for the sculptures. Fernández studied mathematics and later graphic design, working under Italian minimalist designer A.G. Fronzoni. Over the course of her artistic career, Fernández has repeatedly manipulated light, movement and sound to create experiential, kinetic work that amalgamates her passions for art, nature, math and technology.