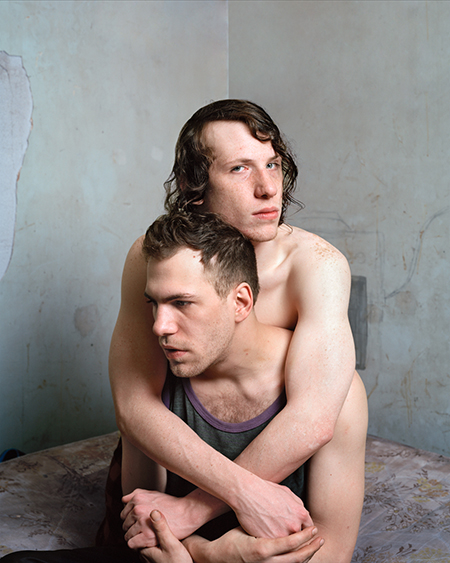 “En Face” features figurative works — by Glen Fogel, Lisa Lindvay, Martin Murphy, Laís Pontes, and Michal Samama — that reference the “portrait,” though they reveal more about the nature of people and the spaces we inhabit than the individual person depicted. In a selection from Fogel’s series, “Call me and we can buy love together,” images of defaced movie posters are like glimpses into the psyches of unknown vandals. Pontes’ “Self and Other” and Murphy’s “Today’s Face” both negate their subjects. The mirror substrate in the former distracts us from the face printed on it by reflecting our own selves. In the latter, the artist pours “news” over his head (a chroma-key effect using green paint and news footage) until his individuality is lost to the barrage of information. Samama physically bears all in stills from a performance in which she presses her nude body against the edges and corners of a room, employing the figure as a tool to prompt reconsideration of our relationship to architecture.

Formally, the most conventional “portrait” of the show is Lindvay’s photo of her brothers, “Ryan and Nick in their Bedroom,” though it’s the artist’s implied narrative that complicates. In this tightly framed scene, one adult brother embraces the other from behind, and their familial and physical closeness is felt, simultaneously warm and confined.