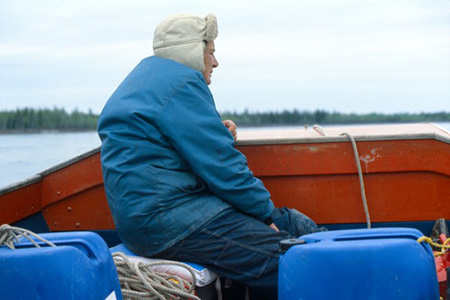 The centerpiece of Donald Woodman's "Agnes Martin & Me" is a series of photographs documenting a boat voyage he took with Martin years ago on the Mackenzie River in the Northwest Territories of Canada. The images show Martin glued to the small vessel's bow, staring out at an abstract universe of rippling reflections. Woodman is at the wheel, charting their course and snapping photos. Many of the photographer's Mackenzie River images do not picture Martin — there's a shot of the river crowned with ice shards, and another that frames the boat's wake as a cascading waterfall — but all of them are in dialogue with the minimalist master's subdued sensibility.

The Mackenzie River excursion is a microcosm of Woodman and Martin's companionship, as told in the photographer's 2015 memoir, also titled "Agnes Martin & Me." Woodman was Martin's personal assistant from 1977 to 1984, and built her home and studio in Galisteo, New Mexico. There are images that capture their domestic life there, and formal portraits of Martin that Woodman produced for Vanity Fair. His overarching mission, as a writer and photographer, is to guide us past the alluring myth of Martin as a serene, otherworldly sage and reveal the complexities of the artist's struggle with paranoid schizophrenia.

In the book's foreword, Dr. Jonathon D. Katz describes Martin as "maddening, self-centered, and abusive" in her interactions with Woodman. It was "the voices" in Martin's head that chartered the Mackenzie River trip, and there's an unsettling energy in her eyes as she stares out into the water. Still, witnessing Woodman and Martin's creative dynamic is a transcendent experience. As viewers, we see through Woodman's eyes as he tries to dive past the troubled surface of Martin's mind and into the quiet infinity that she captured in her artwork.