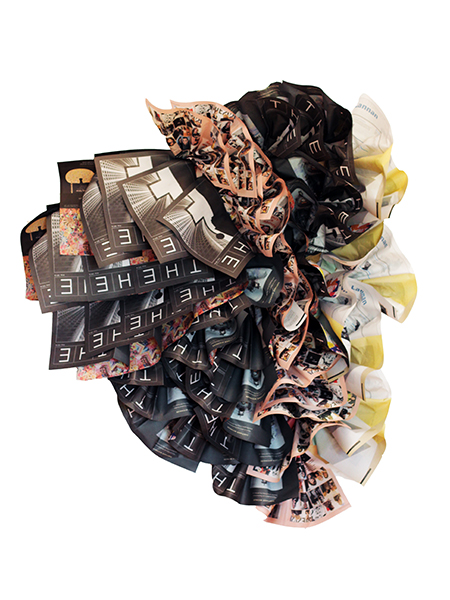 One of the largest sculptures in Madelin Coit's show “Interface," a topiary of metal mesh on a tall white stand, partly unraveled at its base within a few days following the opening. The sight might have been scandalous, except that Coit's installation is a living thing. The local artist will return every Friday through the show's March closing date to create new works and add them to the walls of the gallery. Her primary medium is THE Magazine, a Santa Fe arts publication that has showcased local artists for nearly 25 years.

Using colorful newsprint from the magazine, Coit creates rippling forms that look like sea creatures or mambo skirts in motion. Sculptures constructed from sheets of metal mesh echo the lines of the paper sculptures, and a red neon sign above the door reads "now" and "when" in a single line of cursive (outside the space, a green sign reads "now" and "then"). The planes of the sculptures and the shadows cast by the neon light are intended to create countless "charged interfaces" throughout the space. Last I visited, there wasn't quite enough material on the walls to get a full sense of Coit's intentions. However, it was intriguing to see the faces of local art legends leap from the folds of her newsprint pieces. That's one interface that was evident at the show's reception: the tangle of guests in the space and the swirling stories on the walls became analogs of each other. If you visit Coit's show several times during its run, you’ll get to witness the metamorphosis.