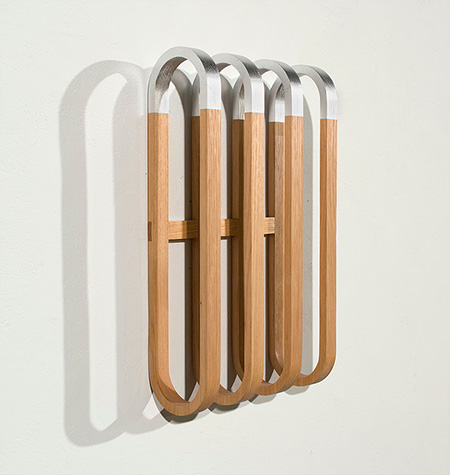 Ryan Goolsby took his photographer’s eye, through a bachelor’s degree from the University of North Texas, and focused it on sculpture for his MFA over a decade later at Texas Christian University (2014).

In the group of sculptures that comprise his show “Totem,” Ryan Goolsby activates a special and particular way of seeing objects in the world.  These spare and compelling sculptures are the result of a process of editing source objects. This begins with how they exist in reality, such that their removal from a social context. Subsequent aesthetic reconfiguration places them between what could be called a Kantian “use value” and an ontological “being in” the world. For Goolsby, within these poles resides the hope that as works of art the sculptures acquire a new purpose as “totems, tools of communication, and existential icons” and that “these objects can be interpreted as a form of societal language.”

The pieces embody the esoteric complexity of these ideas through their thoughtful fabrication in painted wood and wire. All of the pieces are left untitled, thus resisting handing us a linguistic clue, leaving only visual and formal considerations to go by. For instance, in the amazing “Untitled," four wooden ellipses joined by a horizontal spine protrude from the wall in a repetitive, measured, vertical formation. The only hint of color is a uniform shade of metallic silver that coats the upper portion of each shape; the rest is unpainted wood. This odd object wants to ring a bell in our mind as to what is; does it correspond to anything in reality? Is, or was it a bike rack, or just the semblance of one? The fabrication is outstanding as is the design, which makes several things possible when attempting an interpretation, each valid and also questionable. Appropriating things from the social landscape conjures Pop Art, but his treatment of the repetitive forms and clean lines is clearly indebted to Minimalism; at the same time many pieces in the exhibition stand alone as objects of interior design.

All of them bring to mind something that you can’t quite place or identify, effectively bordering on the twilight world of dreams. This suggests a reading of them through Freud’s theorization of dream experiences as “Uncanny” when compared to ideas or objects perceived during waking hours. In "Untitled (Donut),” the odd, the uncanny, and the ambiguous each collide with the resolute precision and attractive features that draw the viewer in. Two wooden planks that come to a point, similar to the ones in a picket fence, hold aloft a large red circle, the center cut out like a donut.  These planks project from the bottom of the circle like two legs, and come to rest on a wall pedestal, the circle leaning against the wall. Again the organic and the artificial conspire to defy a solid proposal, supporting Goolsby’s ideas about his sculptures and their totemic resonance. Though, as formal constructions devoid of actual content, his work also channels the Russian Constructivists. In a way, like them, Goolsby evacuates history and narrative, leaving ample space for his sculptures to occupy in their own way.