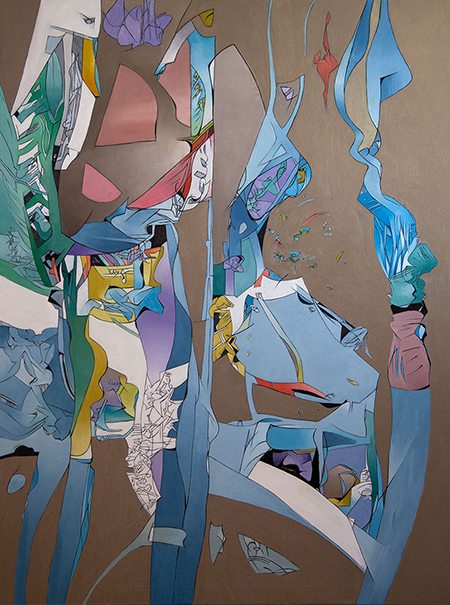 The unique languages of Sarajo Frieden and Carol Sears are juxtaposed in an exhibition that reveals the intimate choices and effects that abstraction can offer the viewer. From Sears’ subtle manipulation of line to Frieden’s strong and aggressive forms, the abstract conversation may start in a similar manner, but results differ dramatically and ultimately find a symbiotic relationship as a whole.

Originating from Sydney, Australia, Sears moved to California in the mid-1960s, spending time in San Diego and later Los Angeles, where she is now based. While the coast and sea of Australia have influenced her past work through titles and a limited color palette, her recent works feature a range of colors that fight for attention and demonstrate a departure. These complicated forms do not flow but instead smash together like the many neighborhoods of L.A.

All of Sears’ recent abstract formations hover above muted backgrounds. Reminiscent of Matisse’s cutouts, there are dozens of unique shapes that overlap and fit snuggly together towards the center of the canvas. Within each shape, the colors shift tones and are outlined in black; think analytic cubism mixed with Hans Hofmann’s push and pull paintings and one can see there is a strong sense of late modernism within each composition.

Sears titled her new series “Jigsaw,” referencing the small pieces of interlocking shapes that make up a completed image. Jigsaw puzzles when incomplete are a pile of small, tessellated shapes. Modern versions are printed on cardboard and feature visual clues on how the different pieces fit together. If we were to disassemble Sears’ images, she would be the only person able to construct them adequately, since she creates them intuitively as she progresses. Yet the abstract shapes appear to hint at something more and have the potential to reveal something personal about the artist.

Sears has a strong foundation in figurative painting, which has helped her establish parameters in her work on which she builds her aesthetic exploration. While the main forms appear organic, they are made up of much smaller angular shapes. However, there are also suggestive forms that materialize within the complicated landscape.

A native Californian, Frieden approaches abstraction through much rougher and bolder forms. A mixture of line work, textures, and shapes, Frieden collects these visual forms from the history of abstraction, non-western cultures, textiles, and the digital world.

A reflective observer, Frieden explores what it means to be human through this imagery. Starting first as a collector and then as a creator, these elements are knitted together as she focuses on particular traits and nuances. As Frieden’s process has matured, she has displayed an increasing appreciation for the unexpected. In this manner, discordant ideas find shared borders to create an expanding vocabulary of pathways and possibilities.

In Johannes Itten’s introductory course at the Bauhaus, students were encouraged to explore their surroundings to discover as many textures as possible. Much like a scavenger hunt, it forced young artists to see the great variety of surfaces they engage and how subtle differences communicate vastly different impressions. Frieden’s pieces feel like a master class in this process, as they appear to live in a new and richly imagined world. Herself a hunter of images, Frieden’s passion is clear and exuberant.

Frieden typically features a particular form in a painting. While each piece is untitled, an image is often placed in the center or on the very top layer of a composition. In one of her untitled works, a swirl appears to bounce upward like a spring. The white lines of the swirl contrast cooler greens, blues and some earth tones that mainly take the shape of rectangles. In another, much warmer piece, four pinwheel-like flowers break the composition into four quadrants. Similar to Warhol’s flowers, they range in size and color. Yet Frieden’s primary subject exudes motion with layers of lines crossing the canvas like controlled wind tunnels.

Sears and Frieden’s imagery together celebrates the range of vocabulary one can utilize through abstraction. There is a sense of discovery within both of their processes that suggests a strong reflective aesthetic that has been nurtured from their careful studies of the world. The end results are stories that are not necessarily shared in a linear fashion but rather a picture that comes from the summary experience they enjoy as artists.