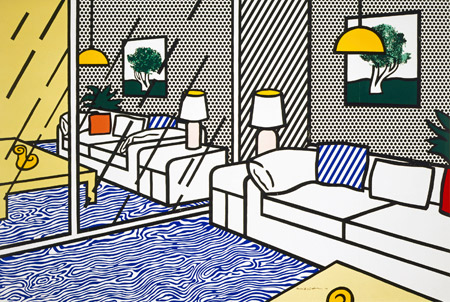 “Pop for the People: Roy Lichtenstein in L.A.” is a moderate-sized exhibition of about 70 works by the New York pop artist made over four decades. It sheds light on how Los Angeles, the artists’ workshop Gemini G.E.L and its co-founders Stanley Grinstein and Sidney Felsen played an important part in Lichtenstein’s career. This rather sparsely hung exhibition is displayed on various colored walls, identical to the prime colors in his paintings. The exhibition doesn’t follow a strict chronology, but rather distinguishes between pop art and high art appropriated works. The first gallery revisits Lichtenstein’s works from his early days as an abstract expressionist to his first pop art works and on to his Leo Castelli Gallery emergence as a major force. Time magazine commissioned images, including “Robert F. Kennedy” (1968) and “Guns in America” (1968).

From the "Interior Series," “Wallpaper with Blue Floor Interior" (1992), produced at Gemini G.E.L., is a screen printed image on water leaf paper depicting the interior of a living room in which its sofa, coffee table, painting on a wall and lamps are reflected in a mirror. Even though there is nothing organic in it, the living room appears lively and energetic due to the wavy-patterned carpet and the half- striped, half-Ben-Day dotted wallpaper. In the second gallery, images that reinvented the works of modern masters, including Dali, Picasso, Monet and Van Gogh, elevated pop-art to high art. Among those is “Haystack” (1969), based on Claude Monet's “Wheatstacks” paintings. In addition, there are some rare photographs of the artist at the Gemini G.E.L. press, and others taken around Los Angeles.