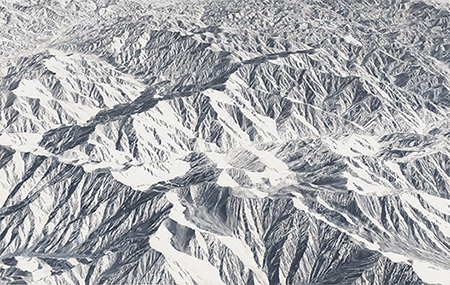 Even one of the largest galleries within LACMA's Broad building can't contain Toba Khedoori's massive works on paper. This mini-retrospective ranges from 1991 up through work produced as recently as last year. Khedoori made her mark in the early '90s with spare images centered on blank, often expansive backgrounds, made with oil and wax on one to as many as five, very large sheets of paper. Her greatest hits are all here, all “Untitled" with parenthetical subtitles: "buildings/windows," "seats," "chain-link fence." In "Untitled (doors)" (1995), three vertical sheets of paper contain five long rows of seemingly identical doors, gathered from the midpoint toward the upper third of the picture plane. Each row becomes a floor, with subtly gated balconies, prison-like in its austere sameness, yet still removed from any burden of place. And for all the repetitiveness, there's as much variation throughout; several of the doors shift from black to a mysterious glowing blue.

This early career phase of Khedoori's is classic post-minimalist in its merging of image and object; the images — spare buildings, hallways or walkways — are as much about absence, and the visual paradox of sparseness and aggressively self-affirming object-hood simultaneously, versus being reliant on content of any kind. The largest of these early works could use even more breathing room than they're allowed. The final gallery is dedicated to works from the last few years, in which she's downsized to modest oil on linen paintings. (One imagines the change a result partly of evolution, but just as much to get away from the physical demands required for the wax-on-paper works.) Though they're lovely images in their own right, and complex given their own standards of spareness, they can feel limp in comparison with their forbears. "Untitled (mountains 2)," from 2011-12, is a notable exception: a vast mountain range rendered in black and white, it could be anywhere — the Andes, the Himalayas, the Alps, the Sierras. Rarely does gazing at a black-paint-on-white-background representation illicit such visceral satisfaction.