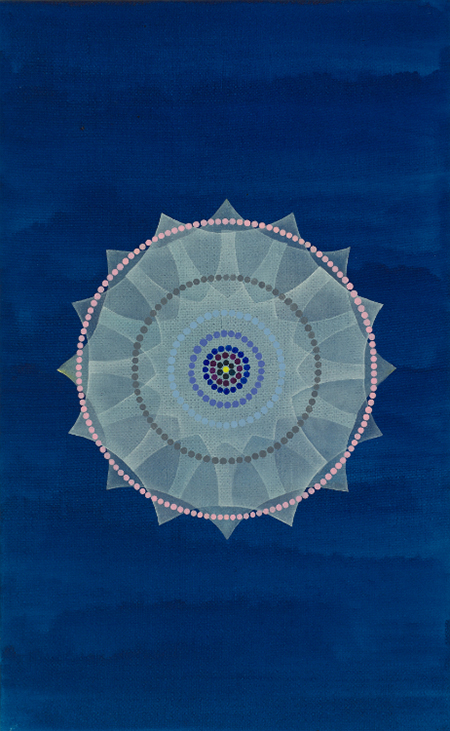 Artists’ Choice, a wide ranging group show at Ellsworth Gallery is the result of artists’ choices. The gallery asked artists who regularly show there to each bring a new artist into the mix.

Paul Bloch’s large and winding double helix form carved from white Carrara marble coils softly near the center of the space, inspired in part by Frank Lloyd Wright’s designs for parking lots that were based upon the great Vatican Museum stairway that eventually became the Guggenheim Museum in New York City. Bloch compares the two active hemispheres of his stone abstraction to the human cerebral apparatus, ever in motion, making choices, designing buildings, carving show-stopping sculpture, etc.

The choice of Bloch as a participant came courtesy of Clare McArdle, whose pensive, stone carving recalls both Korei, the column-like statues of anonymous women from Archaic period Greece, and Manuel Neri’s figurative forms, with a touch of Modigliani’s take on Cycladic idols. Unlike Neri’s work, McArdle’s “color” comes solely from varying the levels of finish and roughed out texture. Indeed McArdle, Neri and Bloch worked together in the same studio in Carrara for some time, where the three sculptors met and became friends.

Connections between artists becomes the theme. Mobilists Karolina Maszkiewicz and her mentor Brad Howe present works activated by the slightest breath or breeze. Maszkiewicz is the minimalist with an interest in organic materials; while Howe, known for his public commissions, presents an utterly pleasurable table-top mobile unit composed of multi-colored ovals that simply swim in the air.

In the diffused sunlight of the gallery’s beautifully lit front room, the slightly iridescent mandala paintings of Grace DiGennaro, a colorful perceptual piece on linen by painter James Hart, and a splashy tour de force encaustic by Lorraine Glessner show beautifully. While at the back of the room, William Debby Fuqua’s "Chairway to Heaven," an amusing assemblage of wooden chairs strapped into an asymmetrical tower, rises (as though by descending scales) to almost touch the ceiling. Similar heights are reached, at least metaphorically, by many of the artists in this fine exhibition.