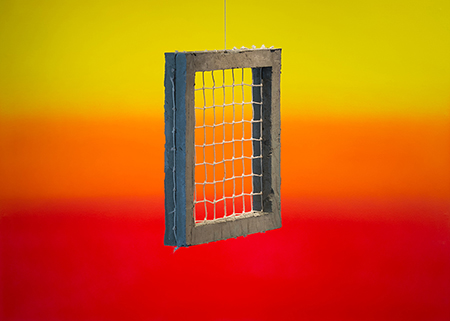 Garrick Imatani’s “A Broken Tower” provides a bittersweet farewell to the consistently superb Hap Gallery, which closes its doors at the end of the month. In a seamless installation of mixed-media works, Imatani reflects on multicultural identity and the obsolescence of fading technologies such as film photography. The tower that supplies the exhibition’s title is an eight-foot-tall column fashioned from wood and sanded acrylic, with wedges of light peeking through strategically placed cracks. It appears to be glowing from within, an optical illusion owing to an overhead light source. Five photographic prints unite disparate elements within the installation, some of them connected via graphite lines drawn on the gallery walls. Among these prints is “A Screen,” which refers obliquely to the often discriminatory screening processes that artists of color (Imatani is Asian-American) are subjected to institutionally as a matter of course.

This thoughtful, materially inventive, and spatially engaging show is precisely the kind of exhibition that Hap has excelled at for the past three years. Director Judy Jacobson, who was a Chicago-based art collector before moving to the Northwest, is a gifted curator with a deep commitment to the artists she shows. But ultimately, Portland’s anemic collector culture doomed the gallery. “The climate for collecting did have an impact on us,” Jacobson reflects. “During our second year I made a deliberate decision to continue our focus without concern for the resulting sales. I knew it was not a sustainable model, but it was the only model I was willing to engage.” Hap’s closing is a loss to the region’s aesthetic ecosystem. We hope Jacobson will continue to curate independently, for she has a unique perspective and much to offer.