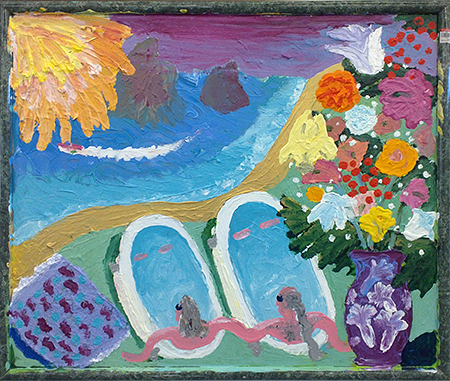 Periodically, Seattle’s art community stages its own exhibits, usually to make a point about being ignored by local art galleries and museums. “American Painting Today” is set up in an abandoned Value Village charity thrift shop on Capitol Hill [located at 1522 11th Avenue through December 17th—Ed.]. The results of such an undertaking are necessarily mixed. In this case, 39 well-known artists share the grungy space with 54 virtual unknowns. Matthew Offenbacher, the self-appointed juror, invited a number of friends who then invited other friends — all of whom were free to send whatever they wished, one or two paintings each. Nothing was really curated or selected; nothing was rejected. Adamantly denying he is a curator, Offenbacher nonetheless deserves the credit (and some of the blame) for bringing together area artists who are committed to the medium of painting at a pivotal time. Conceptual artists were unsuccessful at killing painting; with its two-dimensional surfaces open to social and political imagery, painting has become more relevant than ever.

Displayed salon-style in tiered rows on three long walls without any labels or prices, selections are seen under crowded circumstances that make it more difficult for abstract or minimalist pictures to be seen to their best advantage than for figurative or representational works. Because of the artist-referral method and artists’ self-curating, viewers’ responses will hinge on whether they have prior or no familiarity with a given artist. “American Painting Today” (even the title is a sly joke) is a modest, hometown effort, but one with considerable pleasures and delights among which are interspersed disappointments. How could it be otherwise? Quality control is replaced by lots of good will.

Among the figurative-narrative painters, Forrest Perrine’s “Finger Painting with Cialis, Vase and Speedboat” is the funniest, a crudely painted scene lifted from the erectile dysfunction TV ad with a man and woman in side-by-side bath tubs. It joins other folk-art-like entries, including works by Joey Veltkamp, Shaw Osha and Denis Fitzpatrick. Painted in the same vein, but more formally complex, “Fixated” by Barry Johnson is a tumult of hurtling figures in a crowded consumer environment.

Textiles and recycled or newly knit fabrics comprise a whole mini-section that is filled with considerable promise, offering a fresh perspective on painting’s links to craft. Indeed, during conceptual art’s heyday, painting was referred to as the “sixth craft” after clay, glass, fiber, wood and metals. Among these artists, Paul Komada is by far the most interesting. His “Obviously Covered and Masked” is a zany combine of argyle sweater fragments and a see-through canvas on its stretcher with matching painted sweater pattern. Margie Livingston also deconstructs painting. Her stretched canvas faces the wall, a relic after a performance in which she dragged the painting on her back, weighed down by rocks attached to a string. The historical burden of painting? “Pink Panther” by Sean Barton uses pink satin and fringe as a base for a faint black inkjet image. Nicholas Nyland’s “Soft Painting” further undermines traditional definitions with its odd ceramic add-on. Linda Davidson expropriates a bedspread upon which to paint.

The younger, mostly as yet unfamiliar artists, many of whom have moved to Seattle after attending prestigious art schools back east and elsewhere, provide some welcome surprises. Sasha Ferré, Doug Parry, Andrew Rubinstein and Michael Ottersen show promise of great things to come.

Among my critic’s choice “award” winners are a timely “Tribute to Betsy Ross #6” by Ray Mack that channels Larry Rivers; Sasha Ferré’s remarkable painting of the artist taking her own selfie (it obscures her face); “Where Did You Sleep Last Night?” by Victoria Haven, a black-on-black evergreen tree scene commemorating the homeless; Julie Alexander’s “Duet,” an ethereal abstraction of acrylic on see-through organza dress fabric; and I want to see more of Francisco Guerrero’s dark, moody landscapes such as “At the Cle Elum River — Northwest Gothic.”

Finally, abstraction, another recent survivor of assassination attempts, shows every sign here of recovery and revival. Older stalwarts like Lisa Buchanan (“Tailspin”), Ken Kelly, Harold Hollingsworth and Susan Dory are joined by David Hytone, Julie Alexander, Sue Danielson and Margaret Watson. Given the cruelly crowded hanging and riot of recognizable imagery surrounding them, these artists nonetheless provide an encouraging respite, all the better to assist in contemplating the bright, next future of painting.