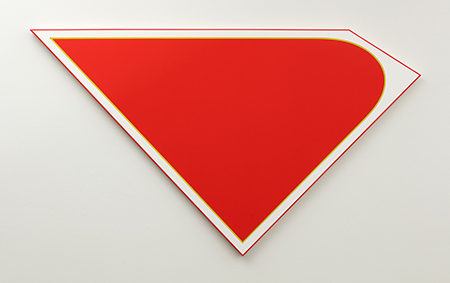 In this newest selection of paintings by Houston based Aaron Parazette, bold abstract geometric art decidedly remains his unmistakable signature style. The pieces were painted in acrylic on shaped canvases, all in 2016, every one with four sides as indicated in the title, each one more striking than the last.  Clearly inspired by the work of Frank Stella and Ellsworth Kelly, Parazette takes strong hold of his materials into which he infuses themes that go back to his California roots and surf culture.  Large volumes of color describe shapes within shapes that create an illusionary space with volumes that seem to both recede and advance from the gallery wall.  Pinstripes, a reference to surfboard art, are used to block off space and to buffer one zone of layered dense color from another.  The work here is a definite departure from former bodies of work that dealt with the formal elements of language seen as abstraction, or abstraction itself as an element that Parazette blew into large-scale temporary installation art.

Here the canvases are quite large, several stretching over 90 inches in length.  Through surface rendering Parazette exploits his invented geometries in order to highlight points and angles usually found in triangles, in pieces like "Flash Fire," "Stranger" and "Speedwing."  These are driven by straight lines and hard angles that depict spaces that could fold in on themselves.  In two pieces, "Superfly" and "Eddy," his signature cropped ellipses and round edge forms are seen for the first time in the shaped canvas format where they look repurposed and fresh, in solid yellow and red respectively.  The work in this exhibition was derived from Parazette’s “Color Key” paintings, yielding a compelling new direction for an artist that continues to build new realms for abstract painting.