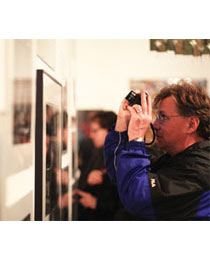 Some 37 years ago photographer Mark Chamberlain emerged fairly unscathed from a two-year stint in the US Army. Unlike many of his peers, he was not shipped to Vietnam but was routed into South Korea where he, rather than shooting people with a gun, learned to shoot with a camera, thanks to crafts classes taught by the Army.

When he re-entered into civilian society it was as a generic anti-establishmentarian with a strong impulse toward environmentalism and social activism. The latter motivated him to open BC Space, a Laguna Beach gallery at first devoted to furthering photography and a venue for his own works along with that of like-minded colleagues, including the late Jerry Burchfield.

As photography became accepted as a serious art form, Chamberlain expanded his circle to include painters, sculptors, multi-media and performance artists, showing their work in a gallery that was truly like no other in the city, best known as the cradle of California Impressionism. Chamberlain sought out artists and art that was relevant to issues close to his consciousness: Politics, religion, the environment, anti-war activism — slaughtering every “sacred cow” imaginable.

Now, at last, Chamberlain’s curatorial vision is being recognized in the retrospective exhibition “Mything in Action,” the title a word-play reference to his formative military past.

Co-curated by Mike McGee and Andrea Harris-McGee, the exhibition focuses on accessible, yet relevant pieces and also some that reveal the time in which they were made. For example, Chamberlain’s “Spring in the Garden,” a photo-collage of a nude covered in linear blooms, brings viewers back to the early ‘70s, years of flower power and sexual liberation.

Scroll forward three decades or so and there is Pat Sparkuhl’s sculptural assemblage “Let us Prey.” Consisting of stacked up Bibles and religious paraphernalia favored by children or more naïve supplicants, and topped by a nude baby doll nearly overwhelmed by an oversized cross, the piece indicts all who rob children of their innocence and faith in the name of religious authority.

Among the paintings, Roger Armstrong’s “Fate of the Beast Within,” stands out. In it, a creature displaying the features of both man and baboon howls in pain and anger; one of its hands is nailed to the ground. A nearby hammer suggests that the debilitation may be self-inflicted. Rendered in a largely red palette, to many who lived through them the painting may suggest the Sixties and its myriad upheavals.

The late Andy Wing’s “Buffalo Hog,” has a quieter but nonetheless disturbing vibe since it reminds one of past historical/environmental calamities on one hand, and of a future in which nature might yet extract its revenge.

For all its socio-political messaging, Chamberlain also kept an eye on the essence of art, which still is and always has been about intelligent visual appeal. Doug McCulloh presents beauty in a diversity of human faces, and Robert Glenn Ketchum’s “Turn, Turn, Turn” celebrates the beauty of nature.

Jorg Dubin’s “Sandman” represents the material/financial excesses of the last decade only too well: A clown wearing a business suit has accessorized himself with the requisite clown hair, make-up, oversized shoes and a briefcase. While the oversized entertainer pulls a mini-float bearing a toy clown by a string, one painfully remembers that there has been little levity in an epoch that has brought two wars and financial ruin to many.