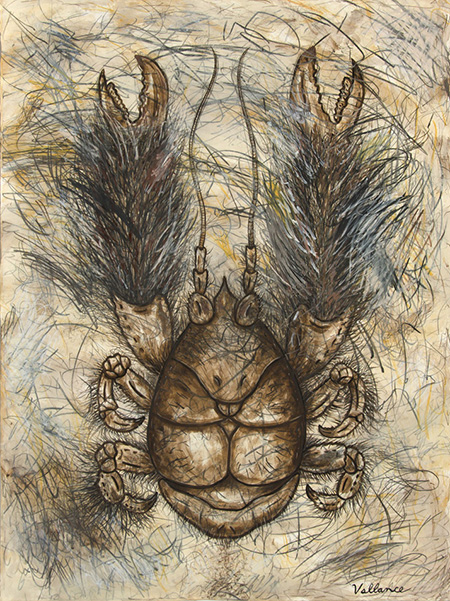 Jeffrey Vallance has attained something akin to cult status. His work covers a wide range of media and is based on consumer and popular culture, and is ironically critical without being didactic. Vallance never makes fun of his subjects, but rather uses what is around him — be it a store bought chicken, the work of Thomas Kinkade or President Richard Nixon — to explore how context can shape meaning. Born in Redondo Beach in 1955 and educated at California State University Northridge (BA 1979) and Otis College (MFA 1981), Vallance resides in the San Fernando Valley. Though considered a Los Angeles artist, his art practice has taken him all over the world. He has traveled to Polynesia to research and make work about the myth of Tiki as well as to the Vatican to study Christian relics. He even created a Richard Nixon Museum after the official Nixon library refused to accept his donation of Nixon inspired artwork. "Now More Than Ever" focuses on his works on paper. The exhibition and accompanying annotated catalogue entitled "Rudis Tractus (Rough Drawings)" provide an intimate look at the motivating forces behind many of Vallance's projects.

Vallance has a deft hand and his drawing style ranges from the folksy and cartoony to exacting realism. The fifteen works on paper which make up the bulk of the exhibition are like a visual map to a treasure hunt through Vallance's unique iconography. Each work, according to Vallance, begins as a wild fury of mark-making from a trance-like state analogous to and inspired by the automatism method of the Surrealists. The resulting grounds are arrays of frenetic pencil marks, which are subsequently covered by gestural swashes of paint and finally dotted with collaged clippings that often point toward hidden doodles. Atop these purposefully cluttered backgrounds Vallance creates a central image based on a memory, an animal or an incident from his past.

Works such as "I Love Reptiles (Elgaria multicarinata multicarinata)," "Yeti Crab (Kiwa hirsute)," "Thorn Spider (Gasteracantha versicolor Formosa)," "Stonefish (Scorpaena Scrofa)” and "Batfish Lagoon (Ogcocephalus vespertilio)" are intriguing drawings on their own, but after reading Vallance's annotations in the catalogue, they take on new significance and are seen in a different light. His text opens a floodgate to interpretation. For example, Vallance depicts the Yeti Crab as a mysterious entity with hairy claws and long tentacles that protrude from it's tear shaped body. The catalogue description talks about the crab as a recently discovered crustacean found in 2005 near Easter Island noted for the blond fur on its claws that resembles the hair on the Abominable Snowman. Vallance notes that it makes it's home in one of the most inhospitable environments on Earth and that it is completely blind. Knowing that the sea-crab is blind certainly changes how the drawing is viewed.

"Kittens in a Basket" is based on an image from a like-named Facebook group Vallance created. (Vallance has created numerous Facebook groups on a wide range of fantastic topics ranging from kittens and UFOs.) In the catalogue he relates a story about his dear friend, the artist Mike Kelley, who when he caught himself in a dark mood would exclaim "Kittens in a Basket!" suggesting that when things got dark he could not imagine anything happier than kittens in a basket. In this drawing, the large green eyes of a seemingly smiling cat stare out at the viewer. The disembodied head and smaller pencil rendering are simultaneously comforting and confrontational. Collaged to the drawing "Chickens (Gallus Gallus Domestics)" is a Ralph’s Market logo and an image of the kitsch futuristic architecture of Las Vegas. Centered in the array of scribbles and gestural Jackson Pollock-like mark-making is a chicken's head dripping blood from it's neck. Rendered in Vallance's loose illustrative style, the drawing references the artist's best-known work, "Blinky the Friendly Hen” (1978). Vallance purchased a chicken at a local Ralph's grocery store and then took it to a pet cemetery for burial. The resulting piece includes a series of photographs, a video and a book that documented the process and the absurdity as well as the significance of the act — mourning for all the dead chickens in the grocery store.

Bumper stickers and buttons proclaiming "Jeffrey Vallance Now More than Ever" and "Vallance Now," created for the exhibition, are a humorous nod to the Presidential election. These stickers are also collaged in the drawings entitled "Vallance Now" and "The White House, Washington, D.C.” In the latter image a blood red wash spills from the archway, filling the wading pool in front of the building while simultaneously dripping from the roof. This image of a wounded seat of power, coupled with the self portrait "Vallance Now," depicting the long-haired, spectacle-wearing artist amidst a sea of scribbled pencil marks and various collaged and other drawn elements, pokes fun at political campaigning while simultaneously alluding to the power of art.