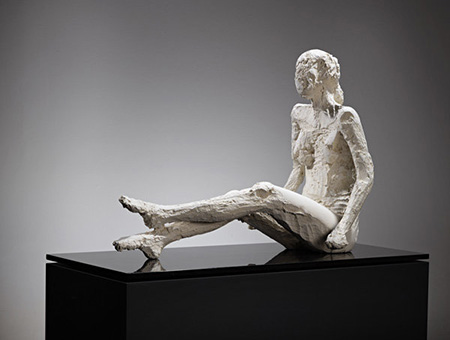 In 1877 Auguste Rodin, working from a model, created a life-sized statue of a nude which he titled “The Age of Bronze.” It was so lifelike that critics accused the artist, erroneously, of having cast the piece from molds. Bay Area sculptor Manuel Neri, born in 1930, has worked with the full and partial human figure — in Rodin’s tradition — for decades, and is likewise a virtuoso at verisimilitude. But his plasters, marbles and bronzes are also shaped by the Bay Area figurative tradition in which he participated; they’re partly illusionistic, but also frankly — with their raw, unfinished areas, exposed armatures and blobs of plasters — artifacts. Neri’s ghostly white figures, sometimes enlivened by bold swipes of paint, suggest Greco-Roman statuary as we used to imagine it, before the historical revisionists revealed that the statues were originally garishly colored. Neri’s effigies, half nude model, half archaic goddess cult figure, with their alternations of sensuous modeling and ‘painterly’ facture, i.e., materials allowed to behave like materials, thus fall midway between the psychologically charged but roughly made figures of George Segal (which were made from casts) and the eye-fooling photorealism of John DeAndrea or Duane Hanson.

Neri’s work is instantly recognizable, so "Bronze: Recent Work by Manuel Neri" holds no stylistic surprises for those who have followed his career. Four life-sized female figures — two standing, plus one seated and one crouching — dominate the gallery, flanked by smaller figures, either free-standing or emerging from steles suggestive of walls — or of large paintings, to return to Bay Area Figuration. All the bronzes are cast from the original plaster sculptures with extraordinary detail and accuracy, and are given a warm, yellowish white patina called Alborada, from the Spanish word for aubade, the French name for a poem or song of parting lovers at the approach of dawn. Neri’s figures, like the ceramic sculptures of Stephen DeStaebler, Neri’s contemporary, are resolutely modernist in that they’re undisguised collaborations with refractory materials, but timeless in their poetic affect/effect. This viewer was particularly struck by the small “Ostrakon” torso, bereft of head and limbs and as elegant as Botticelli’s aborning Venus, but also chipped, eroded and polished by time.