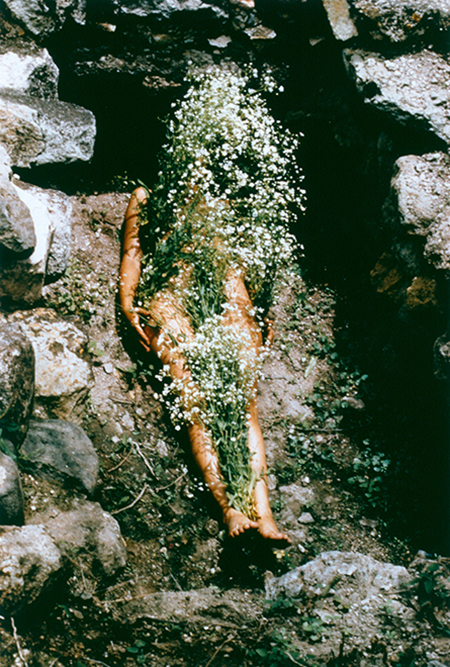 It’s largely coincidence that the five artists included in “Energy Charge: Connecting to Ana Mendieta,” all selected to share the spotlight with the video performance works of the late Ana Mendieta, are all women. But the surge of primal messages about rage, futility, desire, displacement and identity — aided by female-centric viewpoints — add up to an electric and fulfilling show.

Mendieta was a Cuban-born American artist who died tragically at 36, just as her star was rising. Her artistic practice in the 1970s and early ‘80s gained notice for being highly representative of all that was avant-garde and edgy at the time: body art, earthworks and performance. She created a unique synthesis with photography and film. Her “Silueta” works, in which she represented the silhouette of her body inscribed into a number of outdoor surfaces, have a feminist perspective that continues to resonate. One of her most monumental works was “Firework Piece” — a hanging outline of her body set on fire like an effigy. It is here represented in photos and short films.

The curators of “Energy Charge” describe the inclusion of the five artists as creating a “conversation” with Mendieta, and as such, it is a worthy and important exploration of her lasting influence. The gallery featuring Simone Leigh offers three interrelated videos placed so that the viewer is surrounded by looping images of Leigh inside a tall ceramic vessel which is in a dizzying spin. Only the artist's head is showing, summoning thoughts about the objectification of women, as well as the struggles of women of color.

Just as mesmerizing a work, and also a testament to how well performance art can transfer to video, is Ana Teresa Fernández’s “Erasure.” The six-minute video has a sexual charge in the way it depicts the artist brushing tar-like black paint onto the entirety of her body. The sound element is an amplified hiss and sizzle in time with the brushwork. Also included are her two documentations of the performance, hyperrealist paintings that are black-on-black except for the searing, animalistic expression that emanates from Fernández’s green eyes. These works are a response to the 2014 disappearance of 43 young male students from Ayotzinapa, Mexico. They were presumably murdered for staging protests that disrupted their small town.

The works by the three other artists in the exhibition address women’s roles, societal expectations and the agency of the female body. Antonia Wright’s video “Suddenly We Jumped (Breaking the Glass Ceiling)” shows the artist’s nude body in slow motion, shattering a sheet of glass. Kate Gilmore comments on the repetition and futility of women’s traditional roles in her video “Sudden as a Massacre,” in which five women in dresses messily hand-dig clay from a large mound. Among the pieces by Gina Osterloh are two “Orifice” photos paired together, each showing the artist’s mouth amid shapes floating like confetti.

After making connections among these five artists, it’s natural for us to be drawn to a second and third look at Mendieta’s videos and the accompanying photographs. The three-minute film “Burial Pyramid,” for instance, is among the most redolent with female strength and sexual energy. Mendieta is buried in rocks then almost imperceptibly moves them aside, as if she herself is a force of nature. If “Burial Pyramid” is seen as a rebirth message, then perhaps “Energy Charge” is championing a timely rebirth of Mendieta’s work.