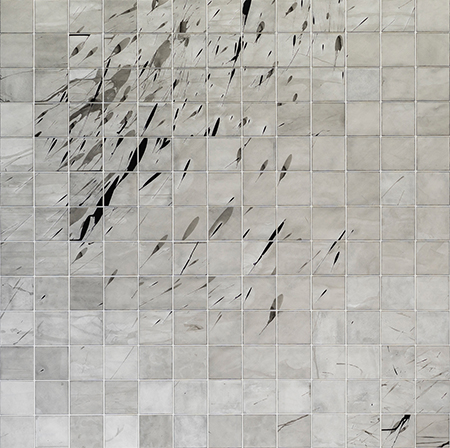 A few years ago, I had a chance to witness Alison Keogh in process, and completely missed it. She was doing one of her Sumi ink throws at the 2014 ArtSmart Gala, and had stretched a giant piece of paper along one wall of a ballroom at the Santa Fe Community Convention Center. One moment it was blank. The next, it was splattered with a single wave of dark pigment. I never saw the artist; she materialized and vanished, as though the ghost of Shigeko Kubota had left behind some inky ectoplasm. Keogh studied architecture at Kingston University in London, and started a career in that field before taking up art. Santa Fe architect and artist William Lumpkins once said, “architecture is structure, art is freedom.” Keogh’s performance piece seemed like her surrender to freedom, a fleeting creative action that at least one of the architects in the room probably snickered at.

In “Pixels” Keogh’s engagement with structure and chaos intersects. Gestural drawings in sumi ink, indigo and graphite are chopped into neat squares that are arranged in grids above dark backgrounds. Some are sensuous gradients that suggest landscapes, while others follow her vocabulary of the spontaneous toss. They are all locked in precise formation, though a closer look reveals that they hover at slightly different heights, subtly emphasizing their physicality. The show’s title refers to the digital landscape, and indeed, these could be representations of closely cropped images on screens. An image composed from pixels inevitably disintegrates into abstraction when you zoom in. With this body of work, Keogh reveals that even the strongest of structures can break.