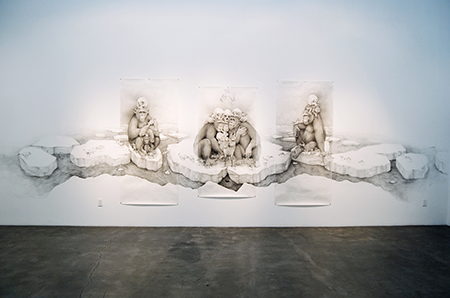 We may all be political animals, but reading “Between the Lines” (the title of this exhibition) doesn’t that aphorism also suggest that animals possess human traits as well? Adonna Khare explores this question symbolically and allegorically via a series of masterfully wrought carbon pencil-on-paper drawings of animals. Khare builds up each drawing meticulously via a tightly constructed weave of fine lines, cross-hatching and subtly modulated shading in gray. Each drawing succeeds in delighting the eye and stimulating the mind in equal measure.

Though this political season is mercifully nearing its end, it seems to have brought out the animal in some of its high profile candidates more than it has in others. Take the Republican party, for example, whose symbolic elephant Khare co-opts in a drawing titled “Elephant Clothesline.” In it two pachyderms support between their mouths and trunks a clothesline from which dangle women’s bras, panties and pajamas. The elephant, which also stands for memory, may very well be reminding us that while this year Americans chose their first woman Presidential candidate from a major party, they have also nominated an opponent whose misogynistic words and actions have denigrated and angered women everywhere.

The artist frames “Elephant’s Clothesline,” with an ominously dark and atmospheric background, alluding to another hot contemporary issue, climate change. Writing about this piece, Khare says it was her intention to “describe the imminent storm that's coming, one that creates environmental changes that are heading our direction.”

Another large drawing, “The Tower,” entwines five giraffes in one spiraling image that formally exploits the linear grace of these elongated creatures and the free-flowing energy of the spiral-like lemniscate form, a symbol of infinity. The animals’ coats of patterned brown patches separated by pencil-thin lighter brown lines are a good example of how the thing seen and the thing drawn become conceptually indistinguishable. Smoke spewing from the animals’ mouths and horns not only unifies the image into a towering inferno of artistic energy, it introduces an emotional element and extends the political symbology.

Khare’s work also evokes Andre Breton’s famous statement that if a person didn’t understand a horse galloping on top of a tomato they wouldn’t be able to understand Surrealism. Share inserts small elements into the larger images that show that she understands and embraces his point. Perhaps less dynamic than a horse racing across a tomato, “Momma Bear” plants a rabbit on top of a Poppa Bear (a small Kinkade-llike cottage with a smoking chimney sets its foundation into the rabbit’s back), while his mate snuggles close to him. Crowned by a bevy of small birds that perch on or flutter above her head, Momma Bear gazes up with a tender loving countenance at her mate, who for his part gazes out at us, as if sitting for a family portrait. It adds up to a curious depiction of traditional family values. Khare’s bestiary speaks to us with a hauntingly human voice, hiding but not obscuring her sharp voice immediately beneath her allegorical surfaces.