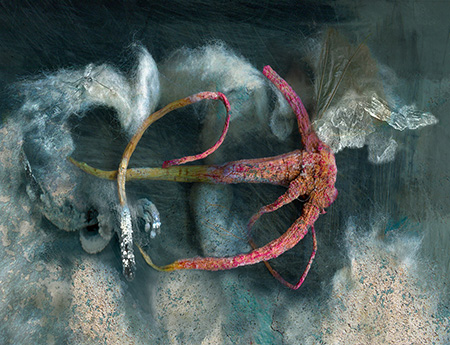 Aline Mare and Michael Giancristiano each have an intensely spiritual take on the natural world in “Organic Integration.” Mare’s mixed media work draws from both the natural and the spiritual environment, combining scanned images in a layered exploration of nature. Mare says she is most interested in the boundaries between photography and painting. Her practice of layering creates a jewel-like effect that has an inner glow. This produces an intense visual poetry, which bespeaks her background as a performance and installation artist dedicated to exploring the body and the senses.

The works here have a profoundly sensual, tactile feel, which the artist has described as a search for a new language, for metaphors that describe the natural world. As the basis for this language Mare focuses on the building blocks of nature, “the systems of conveyance that link plants, bodies, cities.”

Works exhibited here include pieces from Mare’s “Cryst-aline Series” which incorporates the growing of crystals and painting them in relation to natural objects; and selections from her “Cloud Seeds” series, which focuses on delicately, perfectly rendered depictions of seeds, stems, and leaves.

Accompanying such foreground detail in pieces from both series are swirling, hypnotic backgrounds that include digital scanning, which Mare calls a “hybridization” of the 19th century photographic process cliché verre. The visual tension evokes both the rational order of the natural world and the mysteries inherent in it; it is about the minutiae of everyday life and the big picture this intricate mosaic forms. Her art moves us from the contemplation of a seed to that of the soul.

Like Mare, Giancristiano’s share of the exhibition, taken from his series “Arctic Metamorphosis,” depicts rebirth in the form of an icy world that is nonetheless dotted with new growth. Working with beaten industrial plywood, the artist focuses on the evolution of the natural world, the rampant dangers and destruction of global warming, and the awesome properties of nature to regenerate in spite of it. New growth in the face of annihilation forms the thematic underpinning in these pieces by an LA-based artist well known for his plywood wall reliefs.

The artist has described his recent work as being inspired by melting ice caps and what is under them. “Scientists have reanimated organisms,” he notes. He describes the pieces in this show as a progression of his mixed media work, one that serves as an emotionally moving tribute to life’s tenacity. “I incorporate the use of live Neoregelia and Tillandsia air plants. Tillandsia sustain themselves through air particles, light and a small amount of water,” he says. These plants are attached to industrial fasteners that allow them to be removed, nurtured, and reinstalled without harming the artworks.

For Giancristiano, these plants and flowers are representations of new beginnings and hope. The works have an inner shine; the wood on which he mounts the plants seems to shift in changing light with a tidal pull. The overall effect is that the paintings in a sense recreate themselves depending on the angle and time of day during which they are seen.

The artist calls himself an observer, fascinated by the climate and environmental changes in the Arctic and Antarctic regions. “I don’t feel that there is anything we can do to stop the cycle of change that has been set into motion, and I don’t view this as the end of the world, but as a metamorphosis,” he explains. It is this transformation with which he informs his art.

Both artists speak to change with a spirit of the miraculous, to the evolution of nature with a compelling look at what creates life and what changes it. The seamless juxtaposition of the natural with the spiritual world in both Mare and Giancristiano’s work imbues the exhibition with a stirring, definitive visual aesthetic that allows viewers to leap from a contemplation of earthly wonders to those beyond our daily cognition.