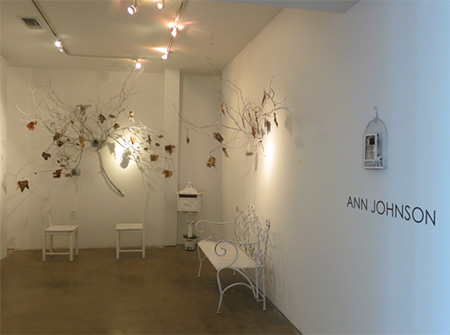 The ten African-American women artists included in “Tribute: Women Artists of the African Diaspora” embrace a broad spectrum of strategies and visual devices to communicate their themes, philosophies and values. The African diaspora referenced in the title attests to their ties to the continent from which their ancestors came. Most live in Texas: Ann Johnson, Prairie View; Jean Lacy, Dallas; Annette Lawrence and Kaneem Smith, Denton; Delita Pinchback Martin, Huffman; and Sondra Perry and Erica Walker, Houston. Alison Saar is a well-known Los Angeles artist, Renee Stout works in Washington, D.C. and Colette Veasey-Cullors hails from Baltimore. Paintings, sculpture, photographs, video and installation pieces dating from the 1970s to the present make this a remarkably diverse show.

Johnson transforms one gallery into a memory garden using large tree branches, a bench, antique mailbox and more, all painted white. Trained as a printmaker, she reproduces African-American portraits and words on fragile, dried leaves that she hangs from the branches. Feathers, wispy sphagnum moss and leaves embellish antique birdcages and wall-hung box constructions. Johnson is part Native American, which may explain her attraction to feathers, and the leaves refer to her family tree. The nests are about “exploring an individual’s private space, thoughts and moments of conceptual seclusion.”

Lawrence first became known to Houstonians as a CORE fellow at the Museum of Fine Arts, Houston, where her work was grounded in autobiography and the counting and measuring of everyday life. She continues her interest in cycles, and her graphite drawings are circular grids based on charts made while digitizing handwritten journals. Also referenced are Pre-Columbian calendars, celestial charts, woven baskets, spheres and discs.

Saar focuses on the female body as a means to reflect on identity. The works here are from the “Lunarseas" series, which refers to lunar cycles, fertility and related mythology. She carves a section of a woman’s body, like a chest or a head, and adds objects such as branches or small carved butterflies. Other influences include African and Haitian folklore, Catholicism, mythology and outsider art.

In Martin’s powerful triptych of large mixed-media paintings, she presents three female figures in a traditional African wooden longboat. The figure at the bow is a young girl wearing a halo-like golden headdress, while behind her stands a young woman wearing a dramatic collar and holding a large wooden bowl. The figure in the back is a more mature female figure. Martin incorporates various signs and symbols that reflect the history of African-American women, ranging from pre-enslavement through the present.

This show was organized in collaboration with Houston’s Community Artists’ Collective, which is celebrating its 30th anniversary in 2017. Over the years, this nonprofit has created countless opportunities for African-American artists through exhibitions, education and community-development programs.