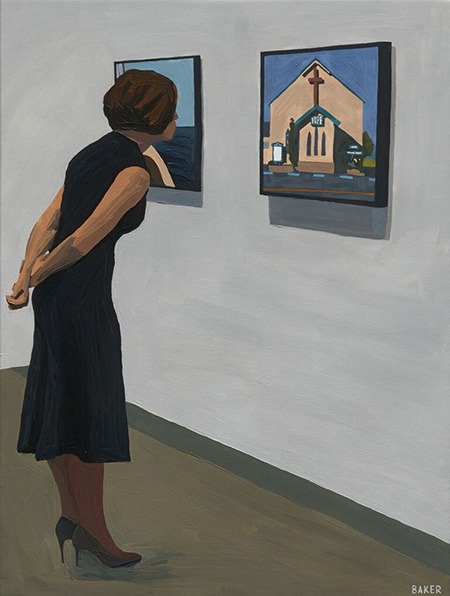 What would Claude Monet paint if he were alive today? Where would Gustave Caillebotte set up his easel if he lived in Los Angeles? How would they paint, these masters of light and color, in the wake of digital images and mass media? The new suite of paintings by Richard Baker recalibrate many of the themes of the Impressionists — scenes of leisure and pleasure, but in this case the California version of life in the suburbs of Paris in the 1870s.

Baker was trained on the East Coast by Rackstraw Downes, from whom he learned the physical and tactical basics of the act of painting. No underpainting or sketch was allowed, one merely loaded a brush, heavy with paint, and began directly recreating large planes and areas of color on a canvas. The goal was to get the paint on the canvas and to capture the scene as it offered itself up to the artist’s translation. In other words, Baker learned to see in terms of light and color, a habit that he embraced and which remains key to this work.

Baker’s penchant for strong shapes and deeply realized color calls to mind Charles Sheeler. He works from photographs from which he eliminates superfluous detail. Drawing on his experience as a Hollywood producer, Baker has a flair for finding a mise-en-scène in a transient moment in time. His eye, accustomed to editing rooms, focuses upon outdoor settings marked by the built environment; nature is part of a theatrical backdrop, established for the delight of the spectators.

"Enjoying the View" is one of his more naturalistic works. We see the rolling hills brown with grass through the repoussoir of the couple reposed in lawn chairs in the foreground. The pair of trees in the left hand corner show thick green brush strokes, inherited from his mentor, that preside over a vista blessedly free of freeways. In Los Angeles we seek this kind of relief, frequently found on golf courses, carefully studded with palm trees and punctuated by water holes, as in Baker’s "Pure!." The Impressionists also sought to leave the city for the delights of the country. They observed the waning of unspoiled landscapes now civilized in the service of sailing and rowing, the activities of the upper classes. Just as Renoir visited the shaded paths of tamed forests, Baker’s tourists get away from it all and hike "Into the Chocolate Mountains.”

Baker also admires the light of Edward Hopper, combining the artist’s interest in architecture with his own interest in structure in the "Caucus House," with its blanked out windows and its sharp guardian rocks in the front yard. There are always hints of a large narrative contained in these concise paintings, but Baker offers no obvious clues. He keeps us at a remove, his attention alerted by a moment in time that seems quite ordinary and yet, like Hopper, suggests some mystery to be solved. In "2 Points of View" we are left wondering: Why is there a man in yellow pants standing in an empty road and why is he pointing outside the painting? On the other side of the road, a black and white dog faces to the right, staring into a desert distance. The road darts through the middle and plunges sharply down a hill and out of slight. The only witness to the odd arrangement is a slightly tilted telephone pole on the horizon.

The same dog reappears in "Dog Noir," featuring the animal accompanied by an array of long shadows — his own and that of his owner. The reference to film noir is an insider’s homage to the use of chiaroscuro in the crime movies of the 1940s. In selecting his scenes, Baker seeks to see something that would be overlooked by the casual viewer and, in some paintings, the lack of event and the ordinariness of the situation seems almost willfully perverse. But Baker seeks to mirror the tiny pauses of everyday life as originally caught by the Impressionists.

Using figures in the manner of Eric Fischl, the artist allows postures and attitudes to sketch a character. It is noteworthy that many of his subjects are viewed from the back. In "On Closer Examination," set in an art gallery, a woman leans over to view one of the artist’s paintings of a church in Cayuses. In "Contemporary Art" a man in a plaid shirt views a Brice Marden abstract painting. While we are not exactly invading the privacy of these subjects, through the artist we are encountering a series of figures seen from behind in ordinary settings made interesting by someone who has an eye for such things.